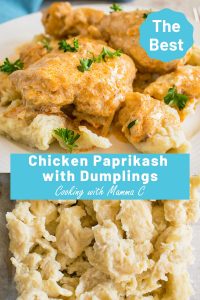 You must try my Hungarian Chicken Paprikash with Dumplings! I’m half Hungarian and worked to get the recipe just right! 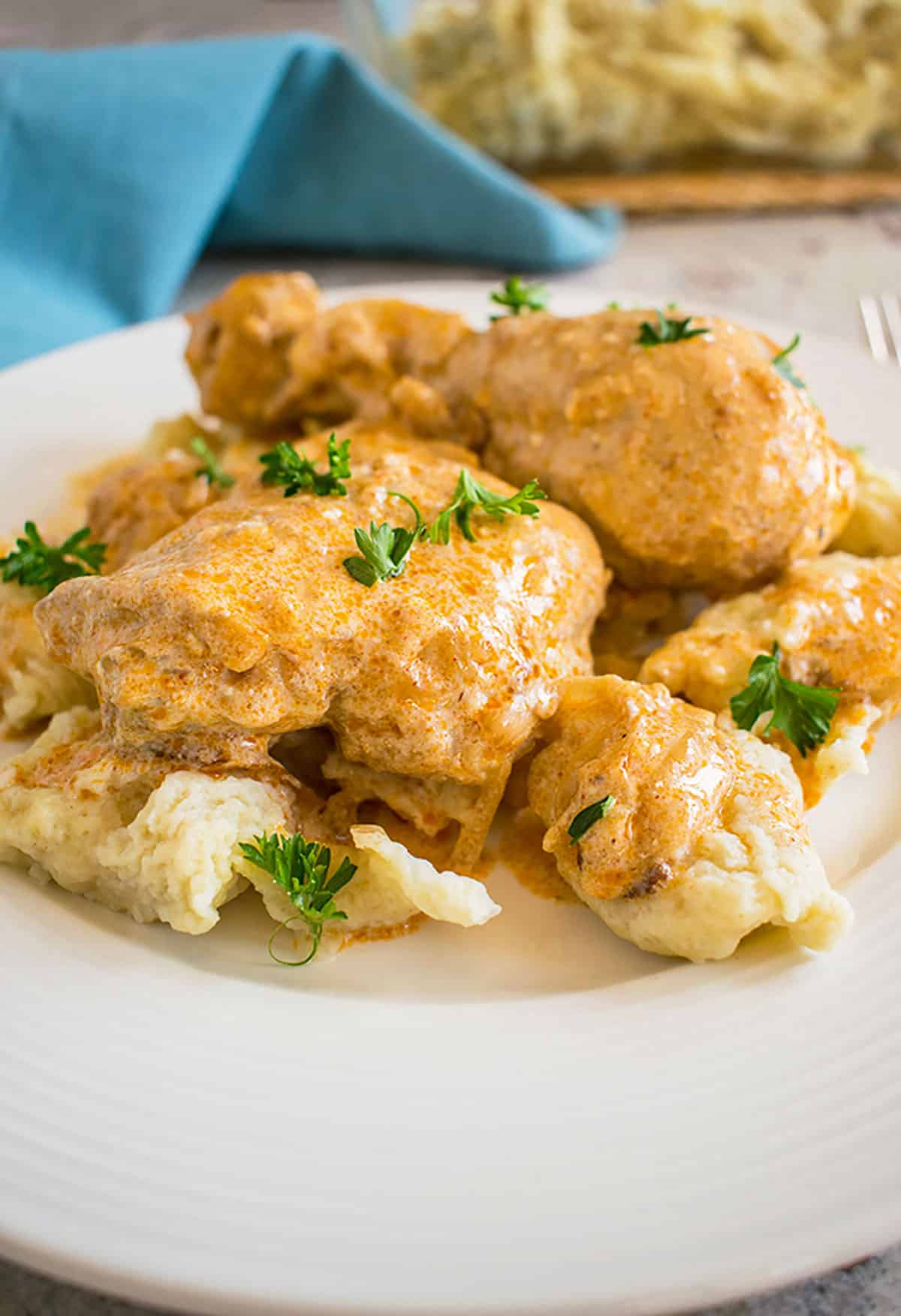 Chicken Paprikash with Dumplings holds a special place in my heart, because it reminds me of my Hungarian grandparents, as well as Nonna. (If you haven’t read my About section, you probably didn’t realize that I’m half Hungarian!)

Grandpa and Grandma (Dad’s parents) were Hungarian immigrants who owned Gold Cross Pharmacy on Woodhill Road in Cleveland. (Grandpa was a pharmacist, just like his brother and father.) 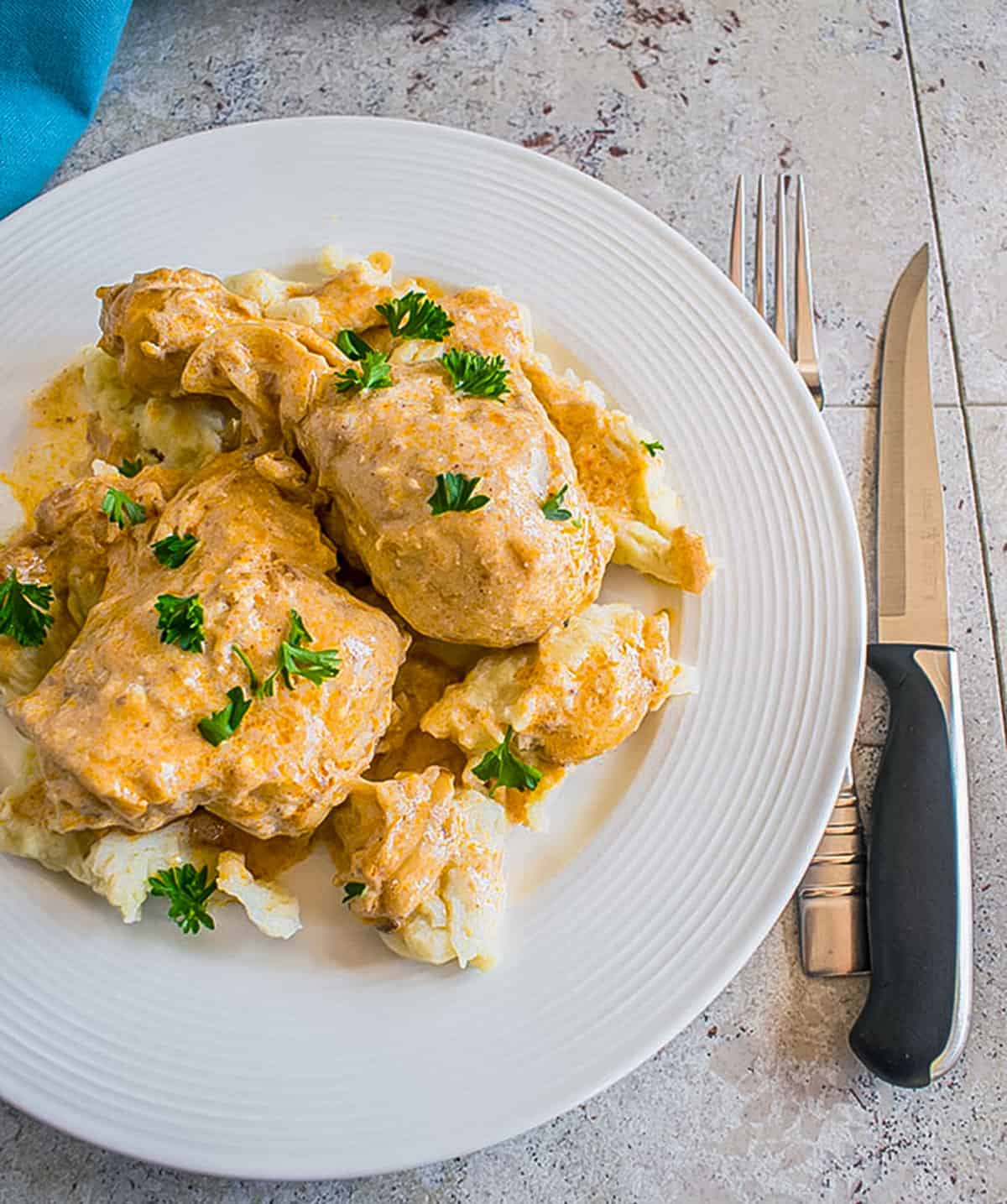 Grandpa and Grandma sold the drugstore before I was born, but how I wish I could go back in time to see it.

There was an old-fashioned soda fountain, where Dad — get this — was a “soda jerk” as a kid, making all of the ice cream floats. (No wonder he always asks my kids if they want whipped cream and a cherry on top of their ice cream!) 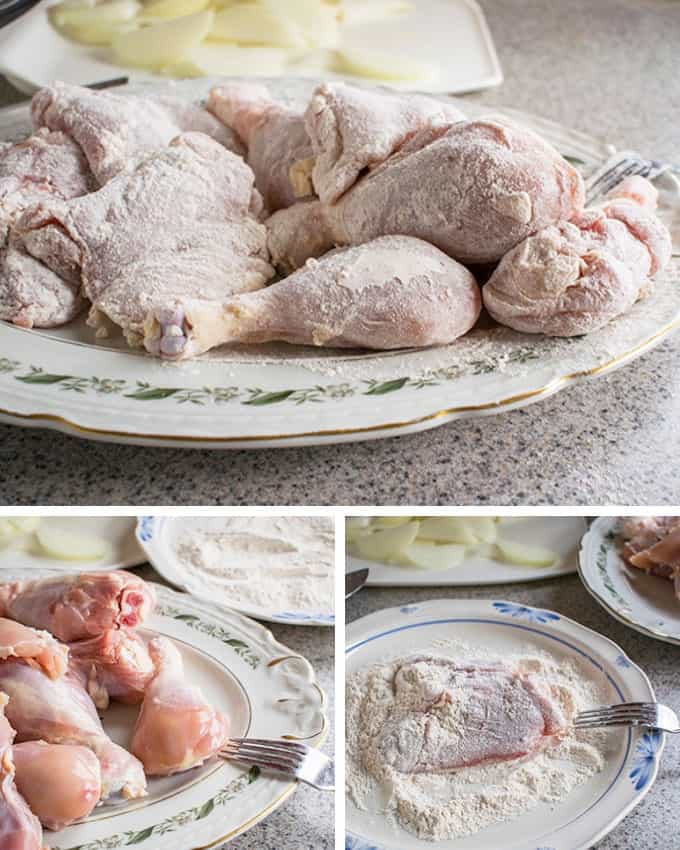 Grandma died when I was six years old, and had not been in good health prior to that, so I never got to spend quality time with her. Grandpa would come to our house for Sunday dinners though, and Mom often prepared dishes such as Chicken Paprikash, Beef Stroganoff, and Swiss Steak for him.

Nonna would be there too, of course, helping Mom to cook. 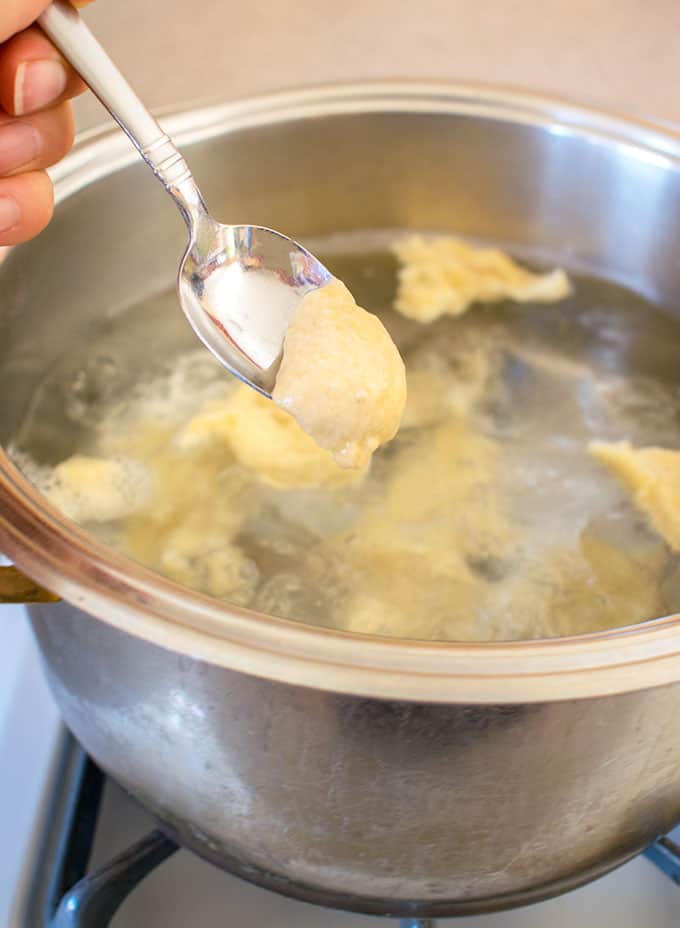 And, since dumplings are very similar to pasta, Nonna was all over them. She’d get so excited about the “trrahm-poh-leens,” as she called them, her eyes twinkling as she and Mom would stand at the stove, Mom boiling the dumplings in batches, while Nonna waited to scoop them out with the strainer (affiliate link) when they were cooked.

Here’s where I let you know that now we only refer to dumplings as “trrahm-poh-leens,” just like Nonna did. In fact, I have to remember to let my kids know they’re supposed to call them “dumplings” in public. 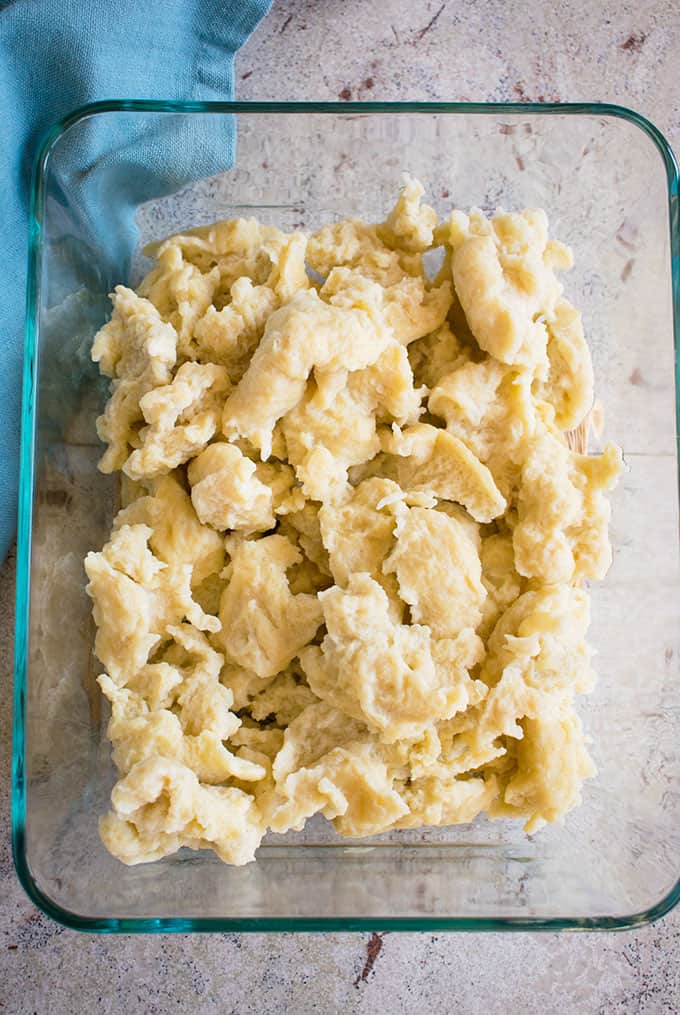 Over the years, I did some experimenting to come up with my own Hungarian Chicken Paprikash with Dumplings.

Here’s what makes this recipe delicious: 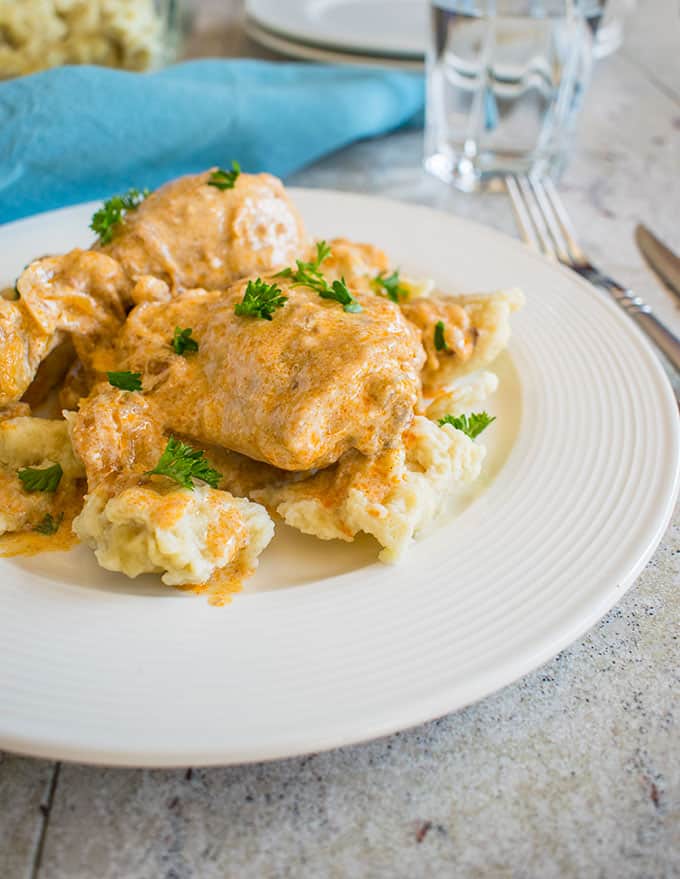 I know I came up with a winner, since my son requests this meal every year for his birthday, Mom and Dad thoroughly enjoy it, and my husband and daughter are always excited to hear Hungarian chicken paprikash and trampolines are on the menu.

This dish is definitely a family favorite, and I hope you enjoy it as much as we do! I know Grandpa, Grandma and Nonna are happy when I get my Hungarian groove on in their memory.

(Recipe Source: Cooking with Mamma C. Originally published on October 2, 2014 and updated now with new photos, nutrition info. and additional narrative. See one of the original photos below!) 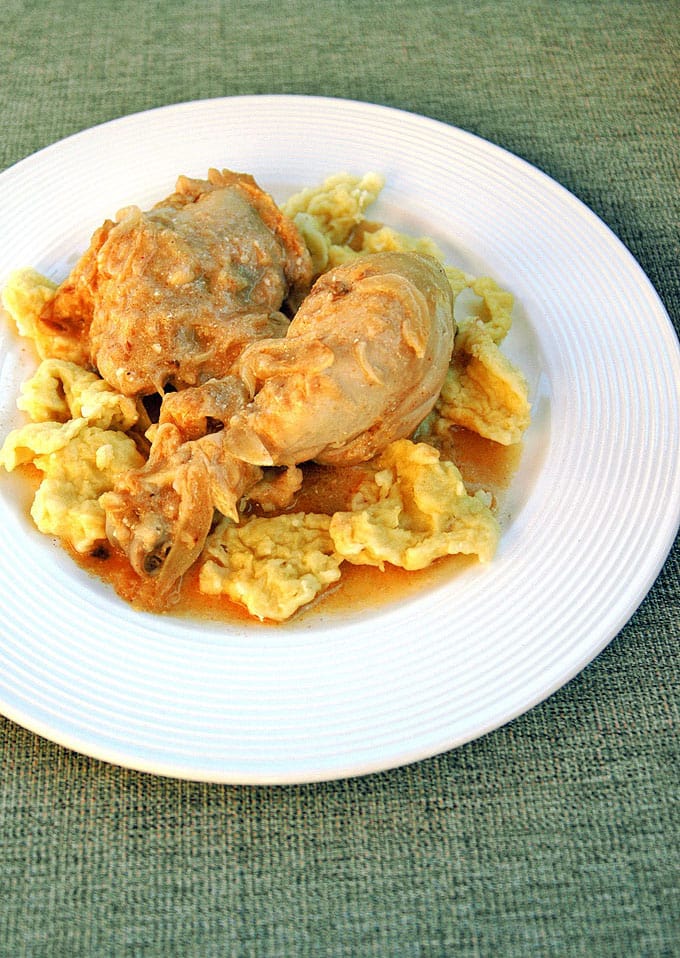 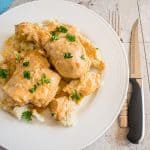