Make these Frosted Brownies and you'll be in love! This is my go-to recipe for rich, fudgy brownies with a creamy chocolate buttercream frosting!

I was trying to figure out what should be the first dessert I post on Cooking with Mamma C. I was going through all of the various options, wondering if I should go with cake, or pie, or maybe cookies.

I just could not decide. I was getting a little stressed.

"I need to make some brownies, and then I can think straight," I said to myself.

No question, brownies are my go-to dessert. They are my comfort food, when it comes to sweets.

Top them with creamy chocolate frosting, and I am in heaven.

He can just look away – there's nothing for him to see here.

There is another member of my household who does not like frosting. She can just ignore that part of the recipe.

But she'd better pay attention to the brownie part, because that is what she has known and loved for years.

For all of us with good taste who can't resist frosted brownies, read on. These babies are from scratch.

You don't need a mix with its partially hydrogenated ingredients. And really, if you don't have much time, you can skip the frosting and just make the brownies for your chocolate fix.

But, will you look at that luscious, creamy, deliciousness?

As you can see, I'm not one to spread the frosting perfectly. It's partly because I'm lousy in art. But it's mostly because I love my brownies topped with gobs of buttery, chocolate frosting cascading in uneven peaks, valleys, and swirls.

That's my idea of perfection.

Don't miss these Triple Chocolate Raspberry Brownies, this brownie-bottom chocolate pie and this Torta Caprese, which is like a brownie cake. And, these date-nut bars are delicious too! 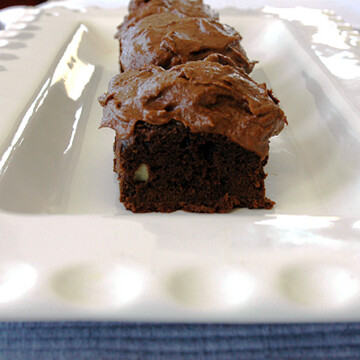 A 9x13 pan will yield 20 brownies. For the photos, I used a 15.2x8 brownie pan with dividers to get 12 thick brownies. Did you make this recipe? Leave a rating!