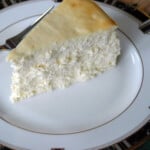 This Fluffy Crustless Cheesecake is simply the best, and it happens to be gluten-free! This New York-style cheesecake has fans all over the world! It's one of the most popular recipes on Cooking with Mamma C.

This Fluffy Crustless Cheesecake is the best cheesecake I've ever tasted! And it's become a holiday tradition for many Cooking with Mamma C visitors, ever since I posted the recipe in 2014.

I'm almost at a loss for words in trying to describe this New York cheesecake without crust. It's fluffy, airy, luscious, creamy and so delicately soft.

It's pure decadence! And, since it's flourless, this is a gluten-free cheesecake.

Delicious on its own, it's flavored with vanilla and is just begging to be accented with your favorite cheesecake topping. I've tried it with homemade versions of chocolate liqueur, strawberry liqueur and limoncello.

But it's excellent with non-alcoholic toppings like Italian Strawberries with Sugar and Lemon, caramel sauce and raspberry coulis.

We enjoy this crustless cheesecake on our trips to Connecticut to visit my in-laws for the holidays. A dear family friend makes it, and my mother-in-law stores it in the freezer to thaw when we arrive.

I asked for the recipe several years ago, and the rest is history!

You can use full-fat or low-fat cream cheese. Just make sure it's softened.

Sour Cream - The addition of sour cream to the batter makes this a New York-style cheesecake recipe. Use regular or low-fat sour cream.

Eggs: We're using large eggs here. I haven't tested this with other sizes.

For a keto cheesecake

You can easily make this no-crust cheesecake low carb. To make a keto crustless cheesecake, replace the sugar with a keto-friendly sweetener. Monk fruit sweetener (affiliate link) has the best taste, in my opinion.

How to make fluffy cheesecake

The key to this fluffy cheesecake recipe is beating in lots of air for volume! Besides beating after adding each ingredient, you'll beat the cheesecake filling for seven minutes.

Tips for the best crustless cheesecake:

How to tell when cheesecake is done

The cheesecake is done when the top is set, except for a small circle in the middle. Don't insert anything into the cheesecake to test it, or it will crack.

Turn off the heat and let the cheesecake stay in the oven with the door ajar for one hour. This allows the cheesecake to finish cooking in the center while the cake cools down gradually.

Can cheesecake be frozen?

You can freeze this cheesecake for up to three weeks with good results. The texture starts to change after that, but it can be used within two months.

Cover the cheesecake (whole, partial or sliced) with plastic wrap, then foil. You can leave the cheesecake in the springform pan and just wrap the whole thing.

Thaw the cheesecake in the refrigerator overnight or let it sit out at room temperature for 2-4 hours. You can thaw an individual slice in the microwave on the defrost setting for less than a minute.

How do you remove cheesecake from a springform pan?

You just need to release the buckle, then lift the sides of the pan to remove the circular frame. Keep the cheesecake on the bottom portion of the pan, however. You can even place the cheesecake with the base of the pan on a cake stand.

If you try this Fluffy Crustless Cheesecake, be sure to leave a comment and a rating! 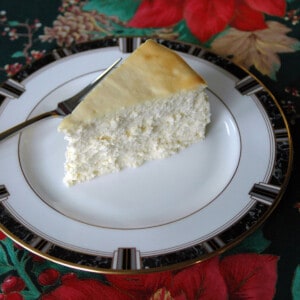 This Fluffy Crustless Cheesecake is simply the best, and it happens to be gluten-free! Try it with your favorite topping! Note that you'll need to refrigerate the cheesecake overnight before cutting into it, so plan ahead.
4.29 from 132 votes
Print Pin Rate Save Go to Collections
Course: Dessert
Cuisine: American
Diet: Gluten Free
Prep Time: 20 minutes
Cook Time: 1 hour 5 minutes
Total Time: 1 hour 25 minutes
Servings: 14
Calories: 452kcal
Author: Mamma C

(Recipe Source: Barely adapted from family friends Lee and Carol, who said it originally came from Williams Sonoma. Originally published on December 22, 2014 and updated now with additional photos and information.)