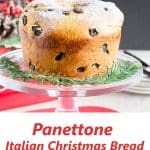 I'm excited to share this overnight panettone recipe with you! Panettone is a lightly sweetened, Italian Christmas bread with dried fruit. My version has rum-soaked raisins, vanilla sugar and citrus zest. It's a cross between pound cake and bread. 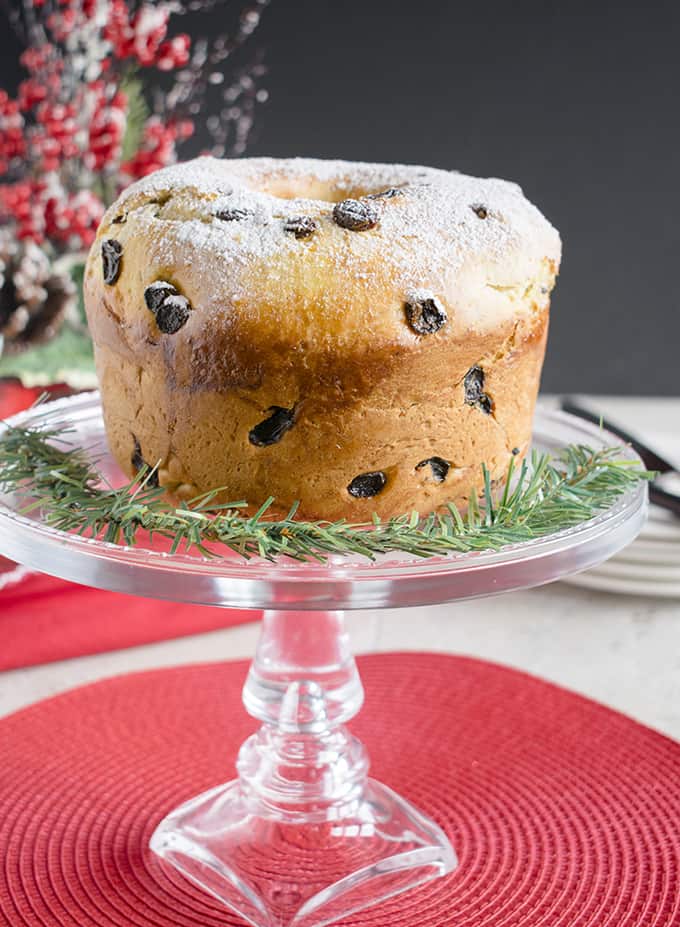 I've had panettone (pahn-ay-toh-nay) on my baking bucket list since I started this blog. Every year of my life, we've had store-bought panettone during the Christmas season. My brother nicknamed it "Tony's bread" as a teen, and we've jokingly called it that ever since.

It's an Italian thing to purchase at least one of these domed, fruit-studded loaves of sweet bread for home, plus more to give as gifts. Yes, people usually buy the panettone.

Because making panettone from scratch the old-school way is a pain in the culo, with several days of preparation required. (Don't worry, I'm not going to put you through that.)

In search of a more modern panettone recipe, I consulted Mom. She said she and Nonna had tried one here in America, but didn't care for the results. 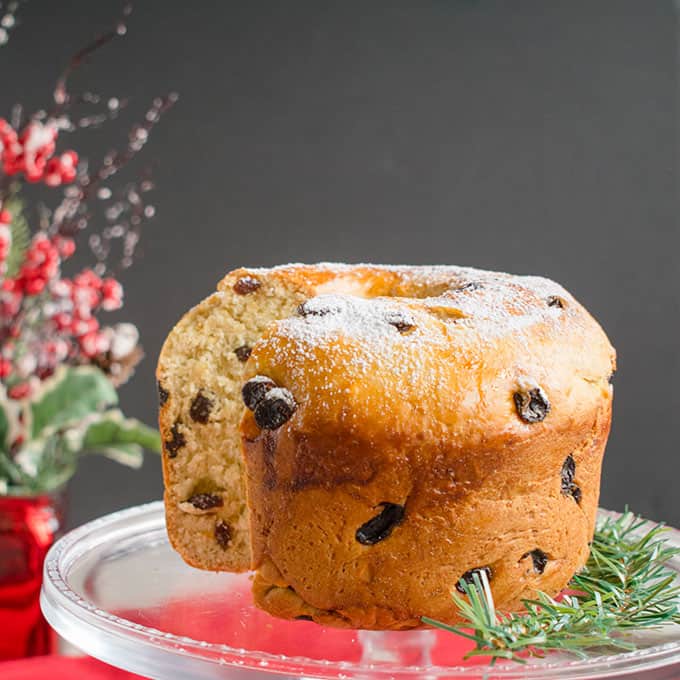 Interestingly, she mentioned my great grandmother (Nonna's mother-in-law), used to make panettone in Italy. I had no idea!

We don't have her recipe, but I thought of my great grandmother (Nonna Rosa) as I researched how to make panettone. I never met her, but her portrait hangs in Mom and Dad's family room, next to my great grandfather's. I've studied her face often over the years, because I inherited her prominent brown eyes and full lips.

I ended up adapting King Arthur's recipe for overnight panettone, but I found the mixing instructions from An Italian in My Kitchen helpful. Serious Eats taught me that soaking the raisins overnight to plump them will prevent the fruit from pulling moisture away from the dough. 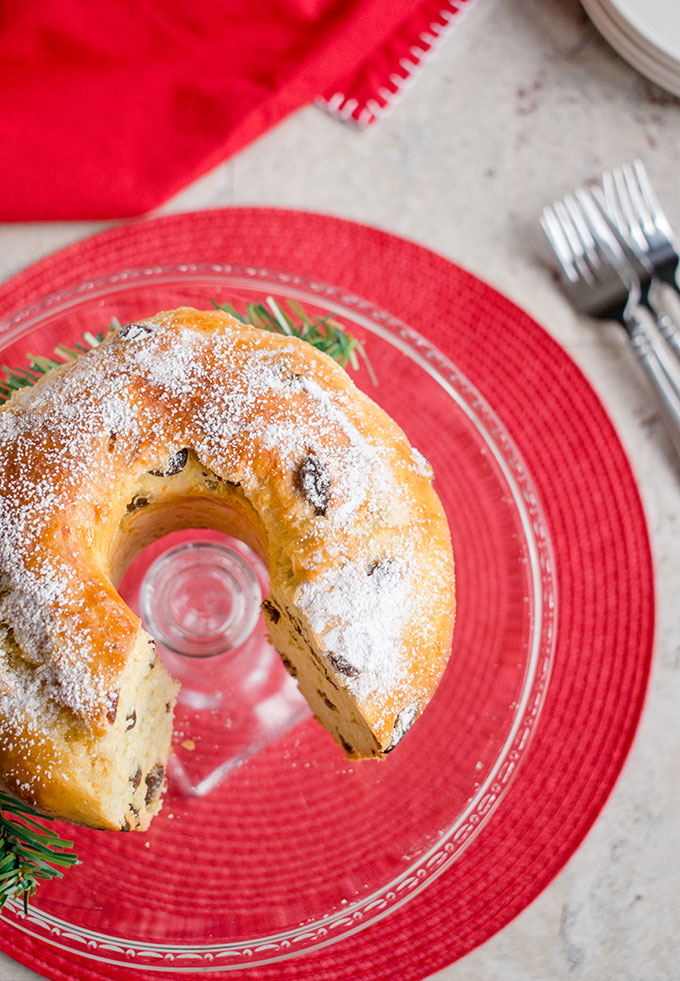 After three rounds of testing, I'm happy with this panettone recipe. I brought some over to Mom and Dad, who both loved it. Dad said it's the best panettone he's ever had!

The texture is somewhere between bread and pound cake. It's difficult to replicate the airier store-bought version, with who-knows-what-methods and preservatives. But, I never thought the purchased kind was anything to write home about.

You just can't beat the fresh taste of homemade panettone. But it's best eaten the first day. I recommend freezing the panettone if it won't be consumed until after that, to prevent it from getting dry.

I've provided tips for storing it at room temperature though (wrap it tightly in plastic with a slice of apple and bag it.) And, I highly suggest making French toast with the leftovers. So good! 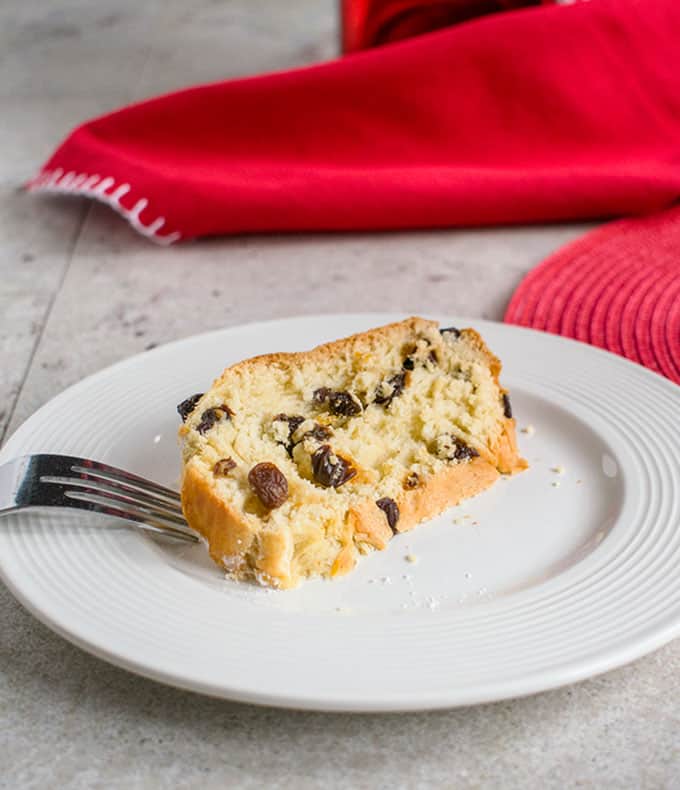 As for what type of baking pan to use, I have a 7-inch-tall panettone tube pan that Mom bought in New York's Little Italy many years ago. I don't see it online, but here's a pan without the tube. (That's an affiiliate link.)

A tall pan with no tube is probably more traditional, anyway. But, if you don't want to commit to owning a pan, you can purchase panettone paper molds (affiliate link). Heck, some people bake panettone in a coffee can!

Friends, I hope you'll try this Tony's bread, I mean panettone recipe. If you're interested in making other Italian Christmas goodies, check out these Italian Cookies, My Son's Tricolor Italian Cookies, Torta Caprese and this Homemade Chocolate Liqueur. Yum!

(Recipe Source: I made several adaptations to this overnight panettone recipe, including using rum-soaked raisins, increasing the sugar and flour and adding an egg wash for sheen.) 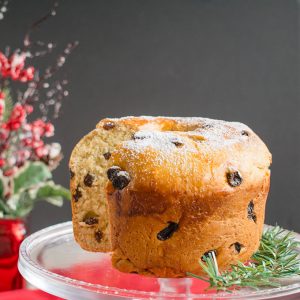 This recipe produces panettone that's a cross between pound cake and bread. It would take days of preparation to make the kind of panettone that's sold in stores. I much prefer this version anyway! Vanilla sugar is simply sugar stored in a container with split and scraped (empty) vanilla bean pods. When I have a recipe that calls for vanilla beans, I save the leftover pods and throw them in my sugar bowl for flavor. If you don't have vanilla sugar, you can add an extra ½ teaspoon of vanilla extract to the dough. Soaking the raisins in rum plumps them and imparts flavor and moisture to the panettone. For a non-alcoholic version, soak them in water. If you don't soak the raisins, they'll pull moisture away from the panettone and make it dry. Adapted in several ways from King Arthur Flour.