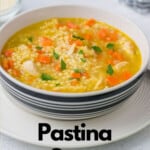 Chicken Pastina Soup is ready in less than an hour! This Italian chicken soup with little pasta shapes features shredded chicken breasts and full-bodied flavor from onions, carrots, celery and stock. It's the best comfort food!

Could you use some comfort food about now? I thought so.

I give you Chicken Pastina Soup, which is basically Italian chicken noodle soup.

It's made with pastina, which simply means "tiny pasta." We're talking about teeny, tiny pasta...the kind every Italian baby is fed before even knowing how to say, "More!"

Mom used to serve it to my kids in Nonna's Chicken Meatball Soup. And since that recipe takes several hours to make, I thought it'd be helpful to share this quicker, yet flavorful chicken soup with pastina.

Because even us adults crave pastina soup, otherwise known as Italian penicillin. It's so delicious!

I always make this soup with chicken stock and water, instead of buying broth. The chicken stock provides more full-bodied flavor.

For the pastina, I like using acini di pepe, which translates to "seeds of pepper" and looks like tiny balls of pasta. You also could use stelline, which means "little stars."

The boneless, skinless chicken breasts are there to add protein, flavor and substance and will be shredded for this soup.

How to make shredded chicken

I like this method for shredded chicken because it produces more tasty results than simply boiling the chicken.

How to make chicken pastina soup

See the recipe card at the end of this post for full instructions, but here is an overview.

The easiest way to shred chicken is to use a stand mixer with the paddle attachment on a low setting. If you don't have a stand mixer, shred the chicken with two forks.

The cooked pastina will quickly absorb the broth in the pot, so serve the soup immediately. Use a slotted spoon to remove any extra pastina from the pot and place it in a separate container. This also prevents the leftover pastina from getting mushy.

You shouldn't need to add any salt beyond what was used to season the chicken. The chicken stock should be salty enough, but taste the soup when it's done, after the Parmesan has been added.

Can you use boneless chicken thighs instead?

Sure! They'll probably be thinner than the breasts, so you'd have to cook them for a little less time. Cook them just until no longer pink inside.

Can you use shredded rotisserie chicken?

That should be fine. You'd start the recipe by sautéeing the vegetables in oil. You'd add the shredded chicken as called for later. Since rotisserie chicken is already salted, don't add seasoning until you taste the soup when it's done.

Can you make this soup ahead of time?

I hope you love this Chicken Pastina Soup as much as we do!

Be sure to check out my soup archives for other favorites!

With my Pasta & Sauces collection, even a beginner can cook like an Italian nonna! 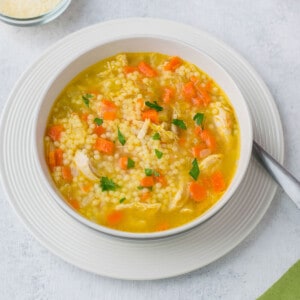