Make Seven-Layer Taco Dip from Scratch and see how addictive it is! Homemade bean dip and taco seasoning take this much-loved party appetizer to a whole new level! It'll be ready in 25 minutes. 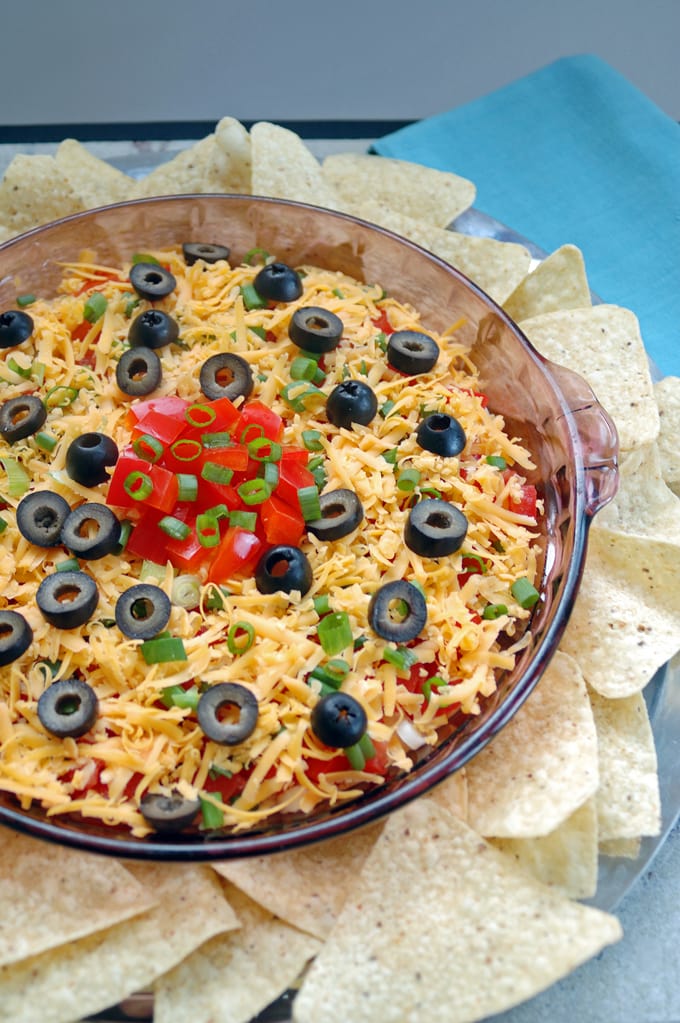 This post is dedicated to the 150+ theater kids (now young adults) who enjoyed this dip at my house during the many high school cast parties we hosted over the years. If it's possible to feel sentimental about an appetizer — this seven-layer taco dip from scratch is the one that gets me.

If I close my eyes, I can still see the girls who'd arrived early gathered around my kitchen island to watch me prepare this.

I can still hear the laughter and banter of the growing crowd as each party progressed.

And I can still see my coffee table being dragged into the corner to make room for dancing in our family room, as teenagers lounged everywhere. (Theater kids always made themselves right at home.)

I loved every minute of it. 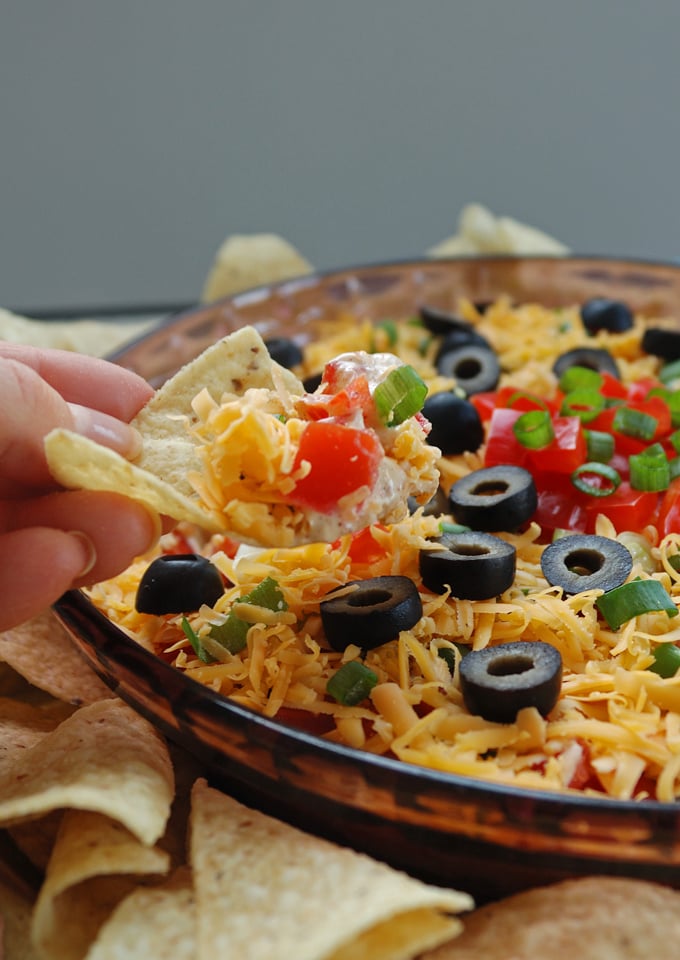 These are the kids who nicknamed me "Mamma C."

I guess it's partly because I always wanted to cook for them. They'd be eating pizza all week after rehearsals, and were really in the mood for something different by the weekend.

My hubby and I initially wracked our brains trying to figure out how to economically entertain such a large group of young people. Don't laugh, but we served hot dogs for our first party, along with this seven-layer taco dip, side dishes, dessert, cake and ice cream. 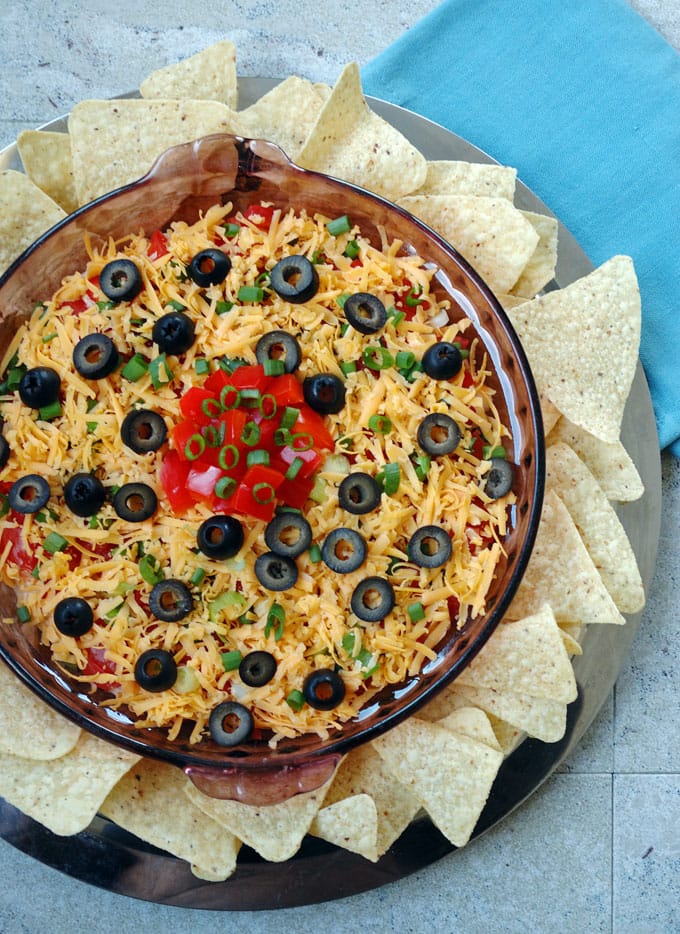 By our second bash six months later, we'd remembered we're Italian. So, I made rigatoni and a big pot of homemade marinara sauce as the main dish.

I wasn't going to serve the dip, since I didn't think a Tex-Mex appetizer was the right fit. But the kids wouldn't hear of it.

"Mom, everyone wants you to make the dip," my son informed me. So, along with the pasta and sauce, it became part of our Official Cast Party Menu.

I tweaked the dip over the years, ditching the store-bought taco seasoning (which basically is a packet of sodium and chemicals with a couple of spices) and mixing up my own. 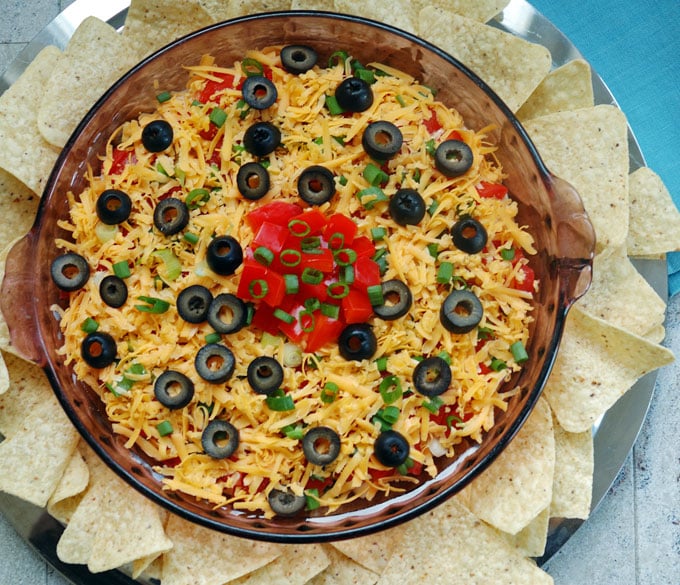 And, now that I'm really trying to cut back on processed foods, I even made the bean dip layer from scratch. It's a lot cheaper, and easy as throwing a can of drained and rinsed beans into the food processor with four ingredients.

Plus, I found organic mayonnaise with no preservatives to go with the sour cream layer and shredded the sharp cheddar myself.

This seven-layer taco dip from scratch is delicious and addictive as ever. It's perfect for the Super Bowl, your book club...and definitely when you're having 55 teenagers over for dinner.

(Recipe source: Cooking with Mamma C. Heavily adapted from a recipe given to me 22 years ago.) 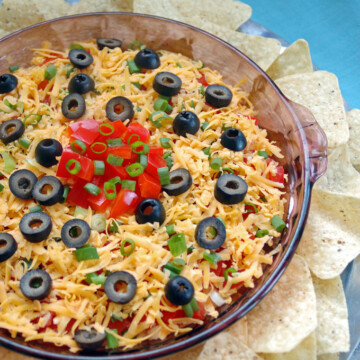