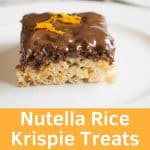 You’ve got to try these Nutella Rice Krispie Treats with Orange! They have the best chocolate-orange flavor. A quick and easy dessert! 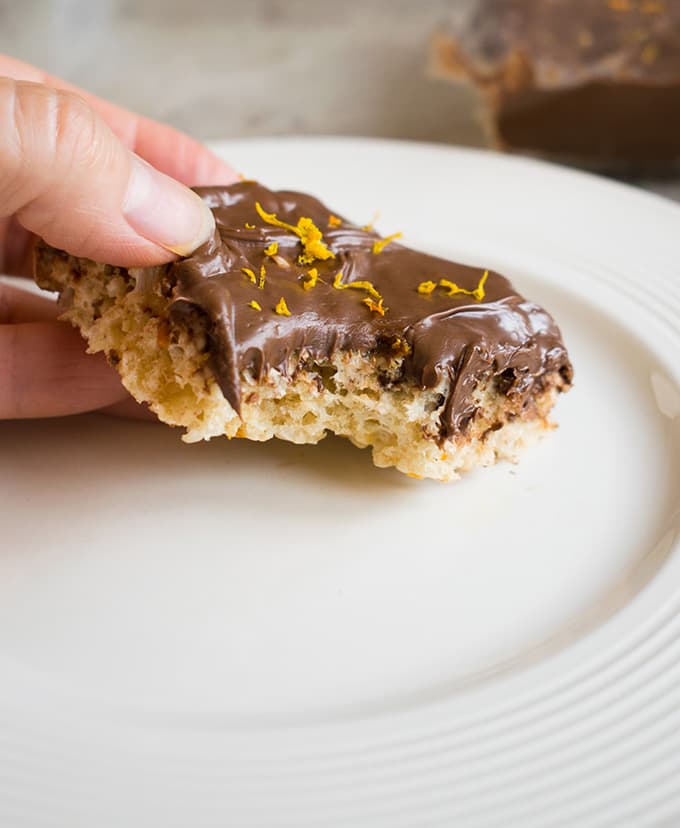 Apparently, I made up this recipe several years ago. I wasn’t even a food blogger yet.

There were no pictures. Nothing was written down. Did it even happen?

My daughter’s Timehop app said so. I got a random text from her a few months ago, before she left college to come home for the weekend.

“Can you make those Nutella Rice Krispie treats with orange?” 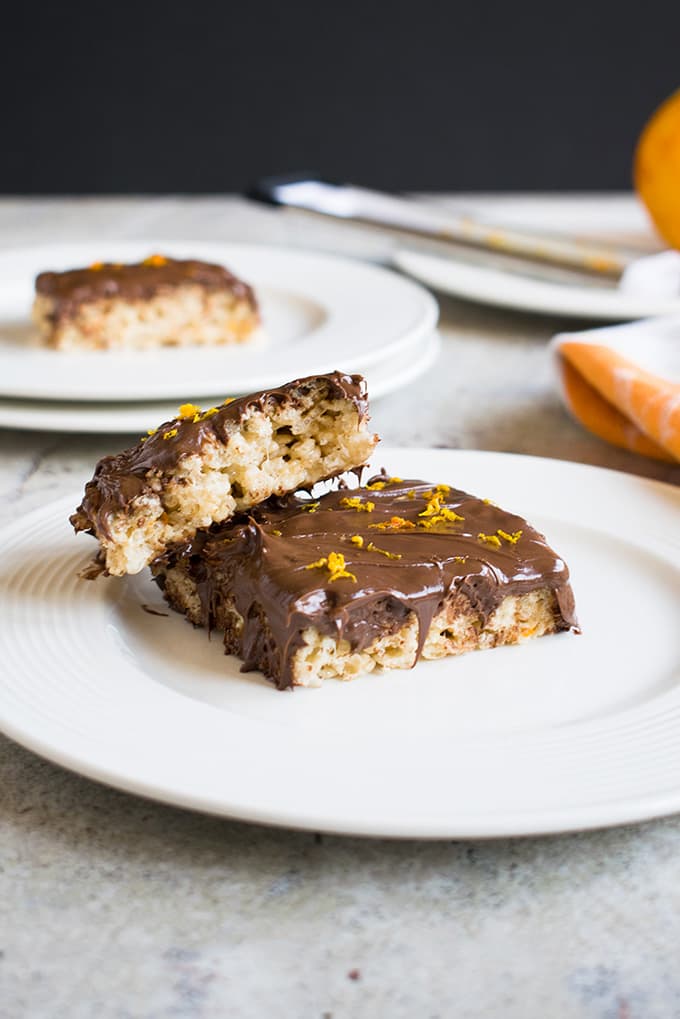 Um, what? I had no idea what she was talking about.

I knew I made Shortbread Bars with Chocolate and Orange but couldn't remember using that combo for Rice Krispie treats.

She informed me it was a thing. An awesome thing...from my kitchen.

She’d loved those treats so much, her young, teenager self had bragged on social media about her Mom making them.

Feeling like a stunad, I ransacked my files. Searched the internet. And found nothing.

But my daughter was coming home from college. And by golly, her Mom was going to have orange and Nutella Rice Krispie treats waiting for her. (Sometimes, I bend my clean-eating rules to honor special requests.)

I began by zesting an orange. There must have been zest, I thought. (Here’s the zester I use; that’s an affiliate link.)

I considered mixing Nutella throughout the Rice Krispie treats. But, a vague memory of Nutella frosting popped into my head.

YES. I must frost the treats with creamy Nutella. 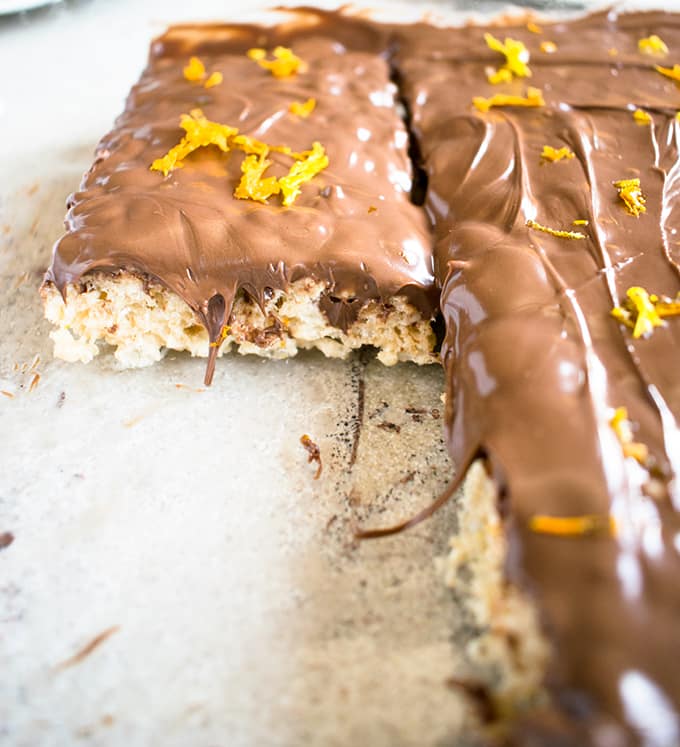 After one bite, I swooned. That chocolate-orange combo, with marshmallow and hazelnut accents…yum!

My family inhaled the Rice Krispie treats, and my daughter was thrilled. I need to blog about these, I thought.

The next time I made them, I added orange extract to bump up the flavor. I went with ½ teaspoon, which provides a nice, citrus hello. But you can take it down a notch, if you prefer.

My daughter was so excited, she wasn’t willing to taste just one before I shot my photos.

Our eyes locked in a showdown as we stood over the pan. She never blinked. She has that capa tosta stubbornness from my hubby’s Calabrese genes. 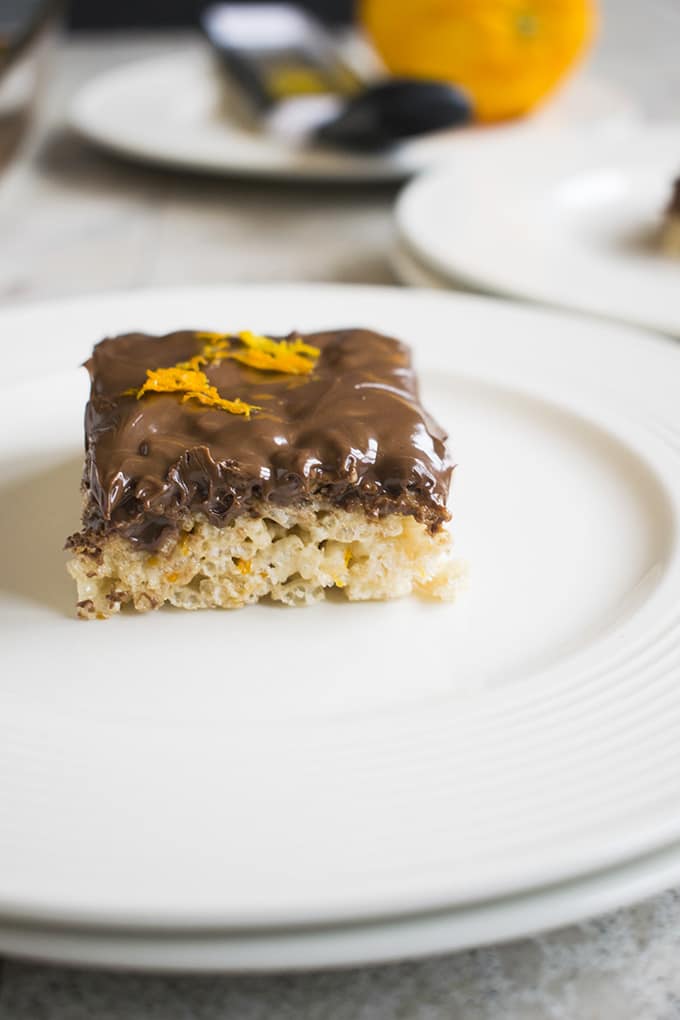 I silently cut another slice and added it to her plate, which she held expectantly under my chin. She smiled triumphantly and walked away to devour her loot.

Add this easy dessert to your repertoire, friends. It’s a sophisticated Rice Krispie treat that definitely would be at home on a cocktail party buffet.

But save some for the kids too. Because…Nutella.

If you’re a chocolate-and-orange fan like me, check out my Orange Pancakes with Chocolate Chips. So good! 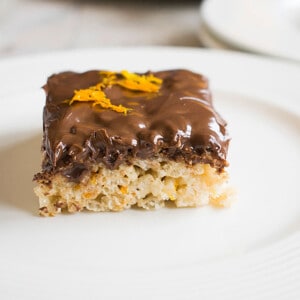