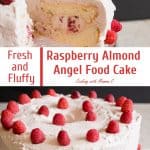 This Angel Food Cake with Raspberries and Cream is always a hit! Make homemade angel food cake flavored with almond or use a boxed mix. Fill and top the cake with raspberry-almond whipped cream and fresh raspberries!

This Angel Food Cake with Raspberries and Cream needs to go on your "Must-Make List," pronto. It's a big hit in my family and many others'.

Once you make it, you'll get requests for it over and over! It's perfect for birthdays, spring or summer holidays, anniversaries and anytime you're craving a fresh raspberry dessert.

And if you're excited about this recipe, don't miss my family's Orange Sponge Cake with Whipped Cream!

Before we dive into this angel food cake recipe, I feel the need to impart some important information.

Forget store-bought angel food cake! It's dry. And, who knows how long it's been sitting there?

You have two, far-better options:

Angel food cake is a sponge cake made without egg yolks. Unlike regular cake, there is no butter or oil.

In this recipe, a little salt, vanilla and almond extract add delicious flavor to the batter. And don't forget the raspberries-and-cream filling!

Raspberries: Use fresh raspberries, not frozen. You need beautiful berries to decorate your angel food cake. Plus, the frozen ones will give off too much liquid for the raspberry cream filling.

Raspberry Fruit Spread: You'll need this to make the raspberry whipped cream. I always use a fruit spread (affiliate link), since it contains less sugar than jelly. But feel free to substitute raspberry jelly or jam.

Raspberry preserves would probably taste good but might be too chunky for the whipped cream.

Cream of Tartar: This is critical to stabilize the egg whites, so the cake doesn't fall apart. Don't skip it!

How to make angel food cake

You'll need a dozen egg whites, and they can't have any trace of yolk in them. It's easiest to separate eggs while they're cold. I use an egg separator (affiliate link).

Tip: Drip one egg white at a time into a liquid measuring cup. Then add the single egg white to your mixing bowl. If you mess up, you'll just have to replace one egg white.

You'll need to beat the egg whites for several minutes to get stiff peaks. A stand mixer (affiliate link) comes in handy.

Bake the batter in a tube pan

Decorate the angel food cake with fresh raspberries. You can place all of them on top or also place some on the sides and around the bottom. You'll probably do a better job than I did!

Slice the raspberry angel food cake with a serrated knife and serve it just the way it is. Or, feel free to douse each slice with liqueur such as amaretto or Chambord, which has a raspberry flavor.

Can you freeze angel food cake with whipped cream?

No, cakes covered in whipped cream don't freeze well. Store the frosted angel food cake, covered in the refrigerator for up to four days.

You can, however, freeze plain angel food cake by wrapping it in plastic, then placing it in a zip-top freezer bag. You may want to place that in a sealed container so the cake doesn't get smushed in the freezer.

What to do with leftover yolks?

You'll have a dozen egg yolks left over after making this angel food cake. You can use them to make Breakfast Zabaglione, pastry cream or mix them with liquid egg whites from a carton to make scrambled eggs or omelets.

Enjoy! And, if you love raspberry desserts, be sure to check out my Triple-Chocolate Brownies with Raspberries!

If you try this Angel Food Cake with Raspberries and Cream, be sure to leave a comment and a rating! 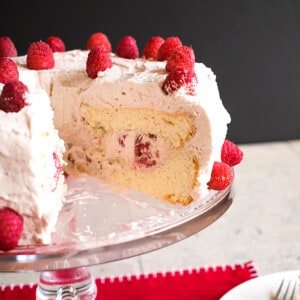 For filling and decoration: