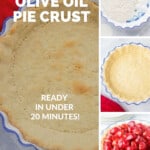 This delicious Olive Oil Pie Crust is ready in under 20 minutes! You'll love this easy, no-roll pie crust. Just toss the ingredients with a fork, gather the dough, press it into place and bake! It's perfect for sweet or savory single-crust pies.

I always judge a pie crust by whether I'd want to snack on it.

Not that I go around doing that. Ha! (Just try and keep me away from this Sugar Cookie Pie Crust!)

I never want to serve a pie that drives people to eat the filling and abandon the crust.

No need to worry about that with this olive oil pie crust recipe! It's so delicious, it earns compliments every time.

It can be used for single-crust savory pies or dessert pies, and even flavored with liqueur!

And can we get an "Amen" for a pie crust that you toss together with a fork and press into place?!!

Let's get to the details.

Olive Oil: This is a no-butter pie crust, so the olive oil is providing the fat. It's important to use mild-tasting, regular olive oil. Don't use extra-virgin olive oil, which has a strong flavor.

You could substitute canola oil or vegetable oil, if needed, but I really love the flavor of olive oil here.

If you want to make this a vegan pie crust, you could try substituting almond milk, or just go with water.

Sugar: Only add sugar for dessert pie crusts. You can skip the sugar for a savory pie.

Liqueur or Extract: The crust is delicious plain, but you could add a little somethin' somethin' for a dessert pie.

I sometimes add a tablespoon of amaretto to the crust for an almond flavor. You also could try Grand Marnier for an orange flavor. When adding liqueur, reduce the olive oil by one tablespoon.

You also could skip the liqueur and simply add a ½ teaspoon of flavored extract without reducing the olive oil. I'd go for almond extract (my favorite!)

Salt: If making a savory pie crust, reduce the salt to ⅓ teaspoon (instead of ½ teaspoon). Most likely, the savory pie filling will contain cheese or other salty ingredients.

How to make olive oil crust

For pies that don't require a baked filling, you'll bake the crust by itself. This is called "blind baking."

It just takes about 10 minutes to blind bake the olive oil crust at 450 degrees F. When the crust cools off, you can fill it with your cooked pie filling.

I use this method for my Fresh Strawberry Pie with Amaretto and Lemon Meringue Pie.

Baking the crust with filling

For pies that require a baked filling, follow the instructions for the pie recipe you're using. Some may call for par-baking the crust for 10 minutes before adding the filling and continuing to bake.

This is the method used for my Vidalia Onion Pie with Cream Cheese.

Is butter or oil better for pie crust?

Olive oil has less saturated fat than butter and contains no cholesterol, so it's a healthier option. And making a pressed pie crust with oil is much easier and quicker than a traditional pie crust with butter or shortening.

Flavor-wise, it's a matter of your preference for butter or regular olive oil.

Can this be used for a double-crust pie?

This recipe is written for a single pie shell. Since the pastry dough is pressed into place instead of rolled, it would be difficult to achieve a smooth top crust. You could pair this olive oil crust with a streusel or crumb topping, if desired.

I hope you love this easy olive oil pie crust recipe as much as we do! 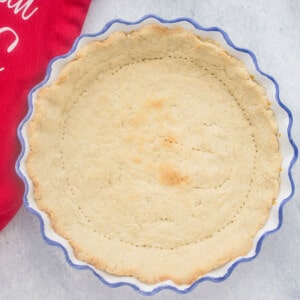 To Bake a Filled Crust