You have to try this Awesome Gluten-Free Pear Crisp! It's vegan too and made with no refined sugar. We love this guilt-free, healthy dessert! 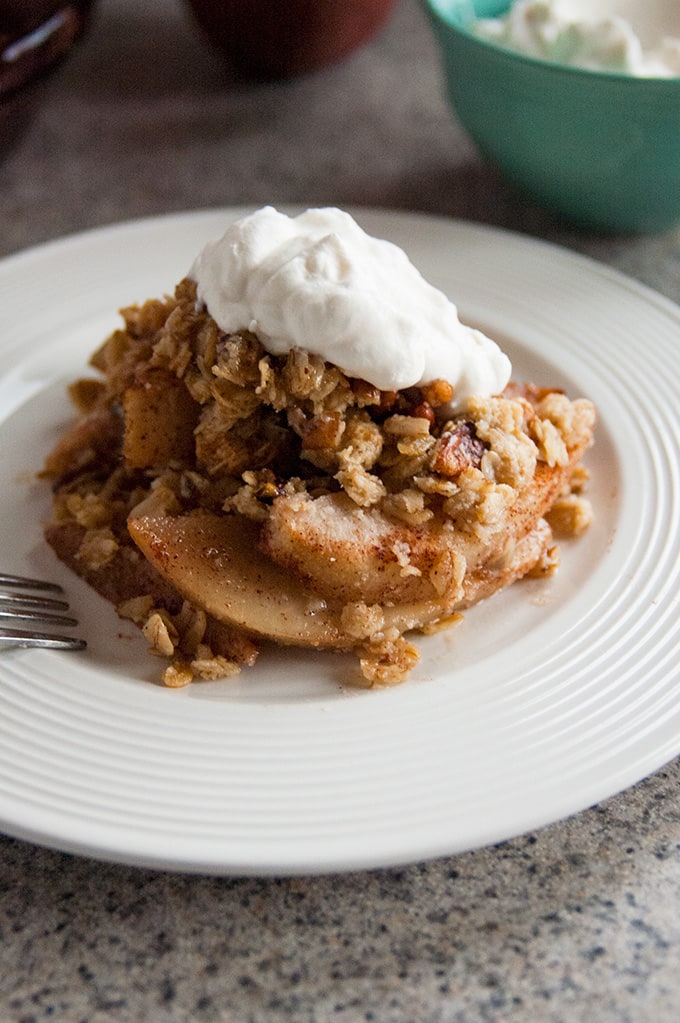 If you don't tell anyone this pear crisp is vegan, gluten free, and contains no refined sugar, no one would ever guess. And, they'll be so busy shoveling in mouthfuls of this nutty, crunchy, salty-and-sweet dessert with cinnamon-spiced pears, they'd probably wouldn't hear you, anyway.

But if you can't resist blurting it out (who, me?), when your announcement registers, they'll gleefully go for seconds. Since it's healthy and all. At least, that's my excuse for devouring half a pie plate of this awesome, gluten-free pear crisp.

What can I say? I really love pear desserts. I also can't be trusted around this Amaretto Pear Cake with Canned Pears. 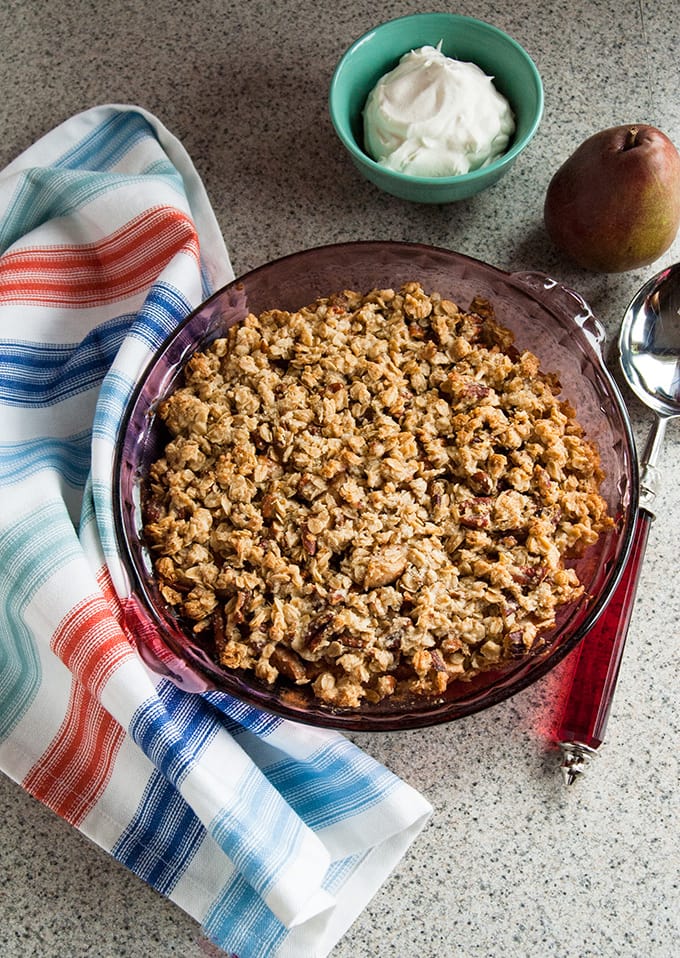 Then, you'll make the most delicious, gluten-free streusel topping, using whole-food ingredients. By that, I mean oats (use gluten-free if needed), almond meal or almond flour, olive oil (yes!), pure maple syrup and coarsely chopped pecans. And, last, but not least, a little salt, which will take us up the express elevator to salty-and-sweet dessert heaven. 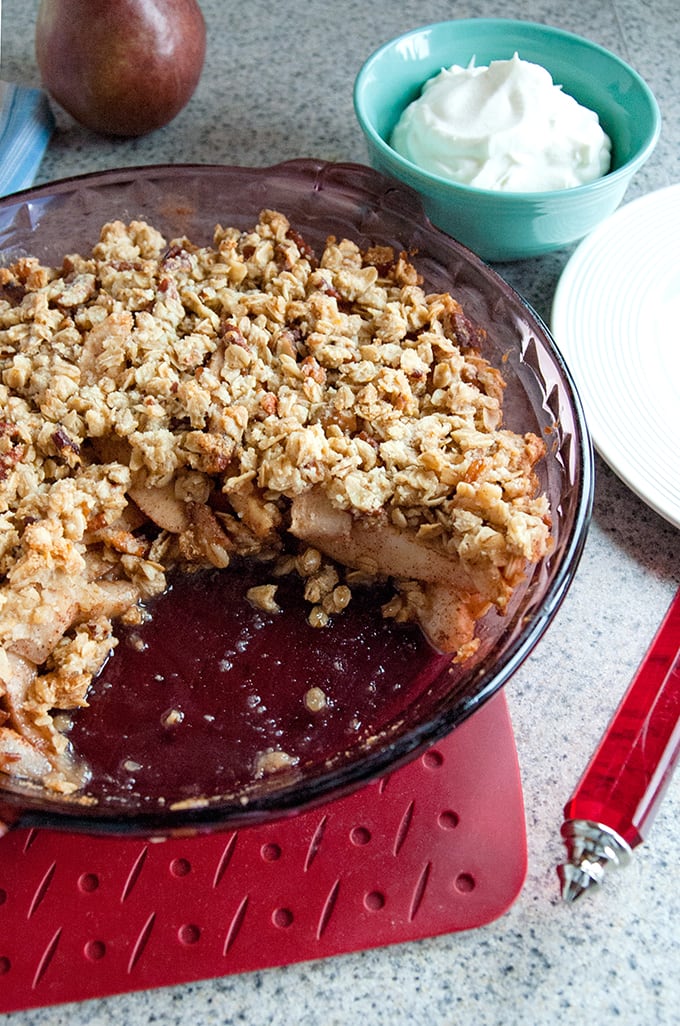 My family shouldn't be surprised to find me shamelessly scarfing down spoonfuls of that crisp topping. It's basically granola, right?

I keep almond meal/flour (that's my Amazon affiliate link) on hand in my freezer, just so I can make this gluten-free dessert. The original recipe called for blueberries and no cinnamon. We enjoyed it, but liked apple crisp better, and now this pear version best. I had to add the cinnamon, which provides the perfect accent without overwhelming the other flavors.

Tip: Store almond meal and alternative flours in your freezer to keep them fresh.

Finally, I usually serve this awesome, gluten-free pear crisp naked. (I'm not sure that came out right.) I mean, no whipped cream or ice cream is necessary. However, I happened to have a lonely half cup of whipping cream in my fridge and decided the photos would look extra enticing with some whipped cream for contrast. I think it worked, no? 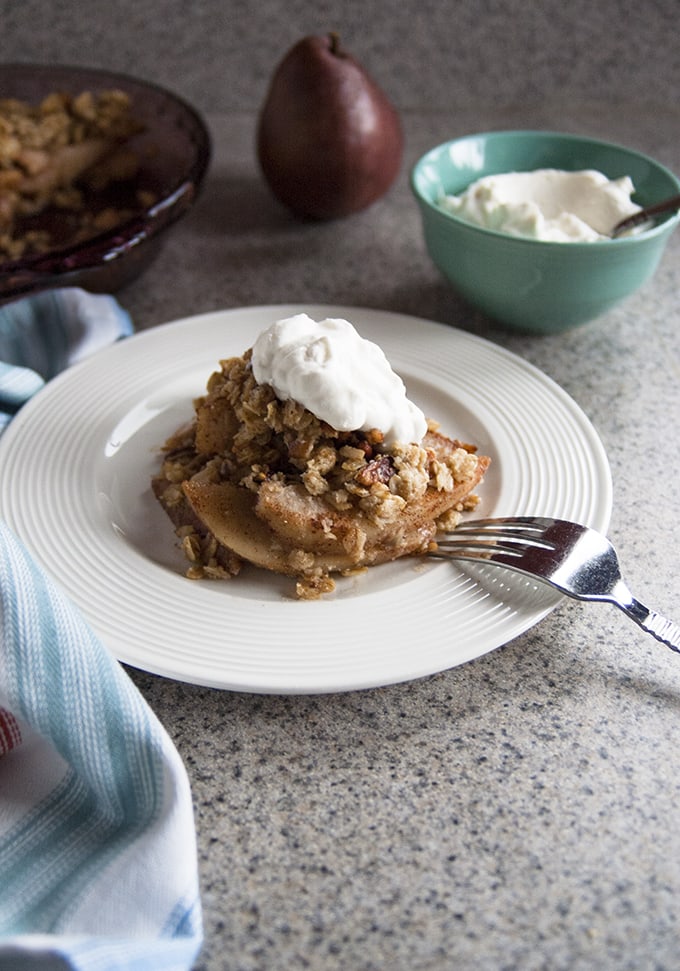 Other desserts to try

(Recipe Source: Adapted from Shauna Niequist, Bread & Wine: A Love Letter to Life Around the Table with Recipes, 2013)

P.S. If you like the idea of using pure maple syrup as a sweetener, check out my Healthy Whole Wheat Blueberry Muffins and my Apple-Mozzarella-Pecan Salad with Maple Vinaigrette. 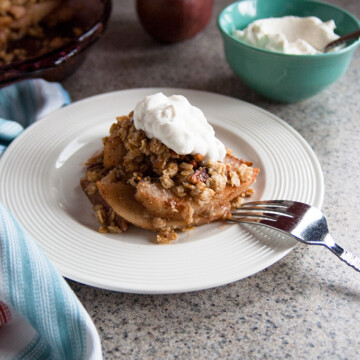 This is so good plain, but if you don't need it to be vegan or lower in calories, you can add whipped cream or vanilla ice cream.