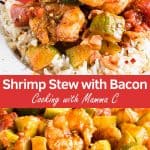 Use up your zucchini in this fabulous Shrimp Stew with Bacon served over rice! With warm chili spices, a hint of smoky sweetness and a New Orleans flair.  Gluten free. 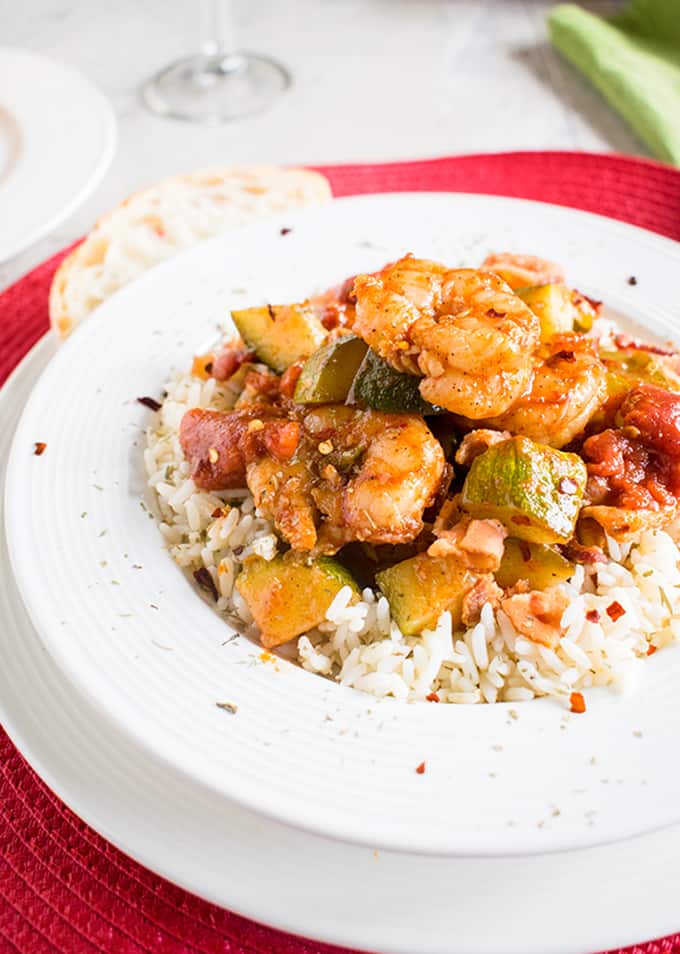 This shrimp stew with bacon makes me happy. There's just something festive about shrimp, bacon and zucchini simmering in a tomato-based stew with warm chili spices and a hint of smoky sweetness.

It all started when I had an intense craving for some type of New Orleans-style dish with shrimp and bacon over rice. It's probably because my hubby and I are planning a spring trip to NOLA for our 25th wedding anniversary.

We've never been there. But, we've heard a thing or two about the fabulous food, music and architecture.

Do you have recommendations for us? 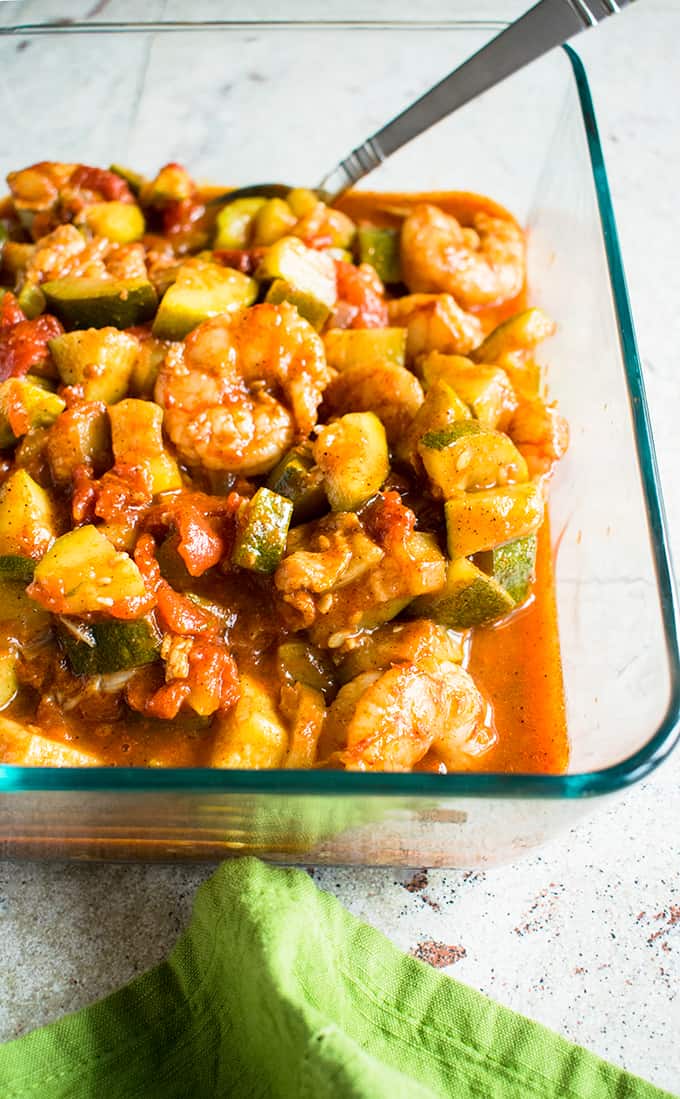 Anyway, one evening I decided to try to make something like shrimp etouffée. But, after perusing a few recipes online, I realized I lacked some key ingredients.

Feeling adventurous, I decided to just make up a shrimp stew with bacon, using what I had.

"Who cares if it's not authentic or blog worthy?" I thought. "I'm going to have fun with this."

And I did. It was so freeing, and as it turned out, delicious! 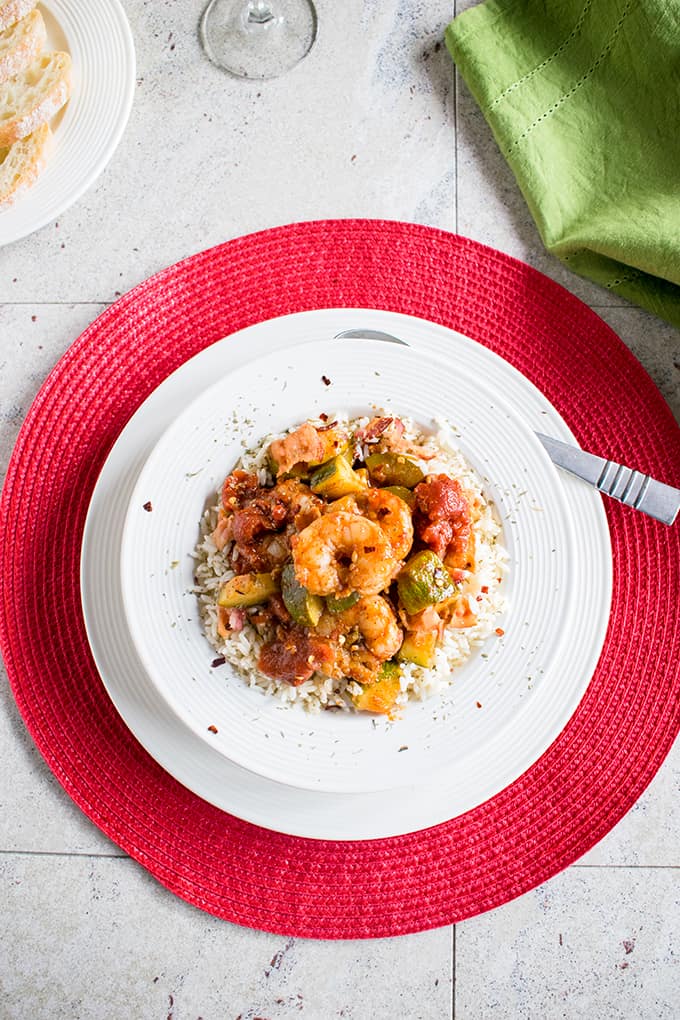 I still had extra zucchini from experimenting with this Cheesy Zucchini Bake. Could I incorporate them in a shrimp and bacon dish using spices and seasonings from my go-to chili recipe? Would a large can of peeled tomatoes work as the base?

Most definitely, yes! This shrimp stew almost has a gumbo feel to it. There's no flour involved, though, so it's gluten free.

My hubby and I were thrilled to dig into this meal, served over rice. 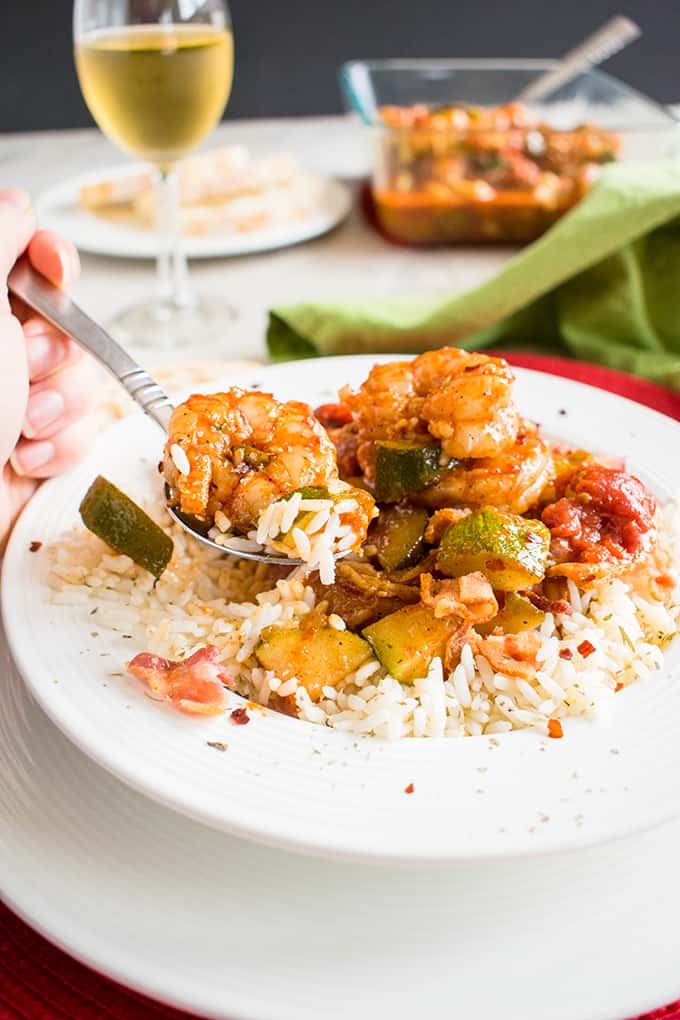 We decided this shrimp stew with bacon was a keeper and deserved to be shared with all of you. So, I gleefully put it on the menu again this week, tweaking the ingredient amounts and making sure to capture some photos.

This makes a generous amount of food, but the leftovers are delicious. (Make sure to eat them within two days.)

I hope this meal makes you happy, too.

Two cups of raw rice will yield 8 cups of cooked rice, which will allow for generous servings. You can follow the method described in How to Cook Long-Grain Rice Like Pasta, using 1 ¼ teaspoons of salt and two tablespoons of butter.