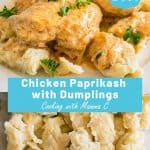 You have to try this Hungarian Chicken Paprikash with Dumplings! I'm half Hungarian, and worked hard to develop the best paprikash recipe! Enjoy this tender chicken simmered in a paprika-infused sauce finished with sour cream.

Chicken Paprikash with Dumplings holds a special place in my heart, because it reminds me of my Hungarian grandparents, as well as Nonna.

Grandpa and Grandma were Hungarian immigrants who owned Gold Cross Pharmacy on Woodhill Road in Cleveland. (Grandpa was a pharmacist, and Grandma ran the Post Office there. Dad was a "soda jerk" making ice cream floats.)

After Grandma died, Grandpa would come to our house for Sunday dinners. Mom often prepared dishes such as Chicken Paprikash (paprikás), Beef Stroganoff, and Swiss Steak for him.

Nonna would be there too, helping Mom to cook.

And, since dumplings are similar to pasta, Nonna was all over them. She'd get so excited about the "trrahm-poh-leens," as she pronounced them. We still call them that in her memory!

Over the years, I did some experimenting to come up with my version of Hungarian Chicken Paprikash with Dumplings. It's a family favorite, and I hope you enjoy it as much as we do!

Chicken: Bone-in chicken provides the best flavor for paprikash and is traditional. I use a combination of drumsticks and thighs, but you can use all thighs, for example.

We're skinning them for a less greasy dish and to let the seasonings and flour cling to the meat.

Onions: Use yellow onions for bold flavor. But, feel free to substitute red onions for sweeter flavor or white onions for a milder taste.

Paprika: There's a generous amount of paprika in this recipe, so it's important to go with one you'll enjoy. I recommend using sweet Hungarian paprika (affiliate link).

Sour Cream: Using full-fat sour cream will produce a smooth paprikash sauce. You can substitute low-fat sour cream for a lighter gravy, but it doesn't blend in as well.

Stock: Using chicken stock instead of broth provides deeper flavor. I use stock in any recipe that calls for broth.

Just like pasta, Hungarian dumplings (nokedli) include flour, eggs, water and salt. Sometimes, milk is used instead of water, but I prefer the texture that comes from using water.

How to make Hungarian chicken paprikash

How to make dumplings from scratch

Traditional Hungarian dumplings are small because the batter is pushed through the holes of a grater or colander (like German spaetzle).

If you don't feel like making dumplings, you can serve Hungarian Chicken Paprikash over egg noodles, or even mashed potatoes.

For side dishes, consider something that doesn't require cooking on the stove. Go with Roasted Butternut Squash Cubes, The Best Italian Green Salad or Spinach Salad with Mandarin Oranges.

Can you make a smaller amount?

This Hungarian Chicken Paprikash recipe makes enough for at least eight people, so it's great for leftovers. Feel free to make half of the recipe.

I often make half of the chicken but the full amount of paprikash gravy and dumplings, since my family eats huge portions of them.

How long do dumplings last?

Store leftover dumplings in the refrigerator and use them by the end of the next day. (They will start to turn grey after that.)

If you wish, you can cook half of the dumplings and save the rest of the batter in the refrigerator to cook fresh dumplings the next day.

If you try this Hungarian Chicken Paprikash recipe, be sure to leave a comment and a rating! 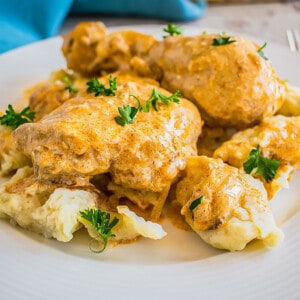 Chicken Paprikash (You can halve the recipe if needed.)