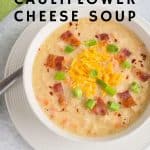 This Slow Cooker Cauliflower-Cheese Soup is so delicious and comforting! Serve it with toppings such as bacon and chives for a loaded cauliflower soup that'll knock your socks off! Plus, it's gluten free and has just 15 grams of carbs per serving. 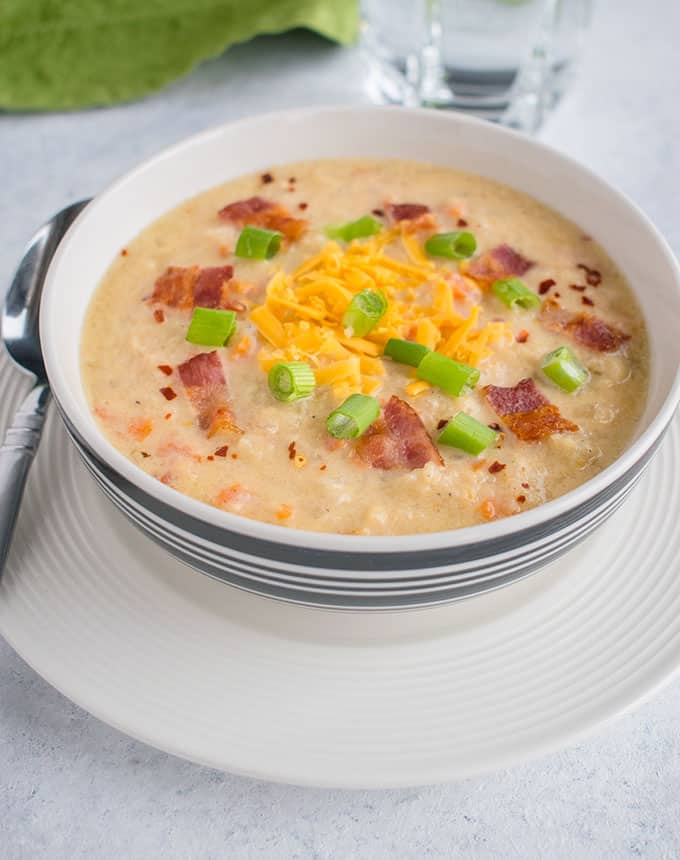 If I were doing a commercial, I'd loudly announce this cheesy cauliflower soup recipe is New! and Improved!! It's lived on my site since 2016, but I gave it a complete overhaul.

I made it three times in three weeks to get it just right. Even my toughest critics here gave it their thumbs up.

Soup-ah!!! (Any Monty Python fans out there?)

Let's get to the details so you can add this awesome soup to your repertoire, ASAP. And don't miss my other soup recipes! 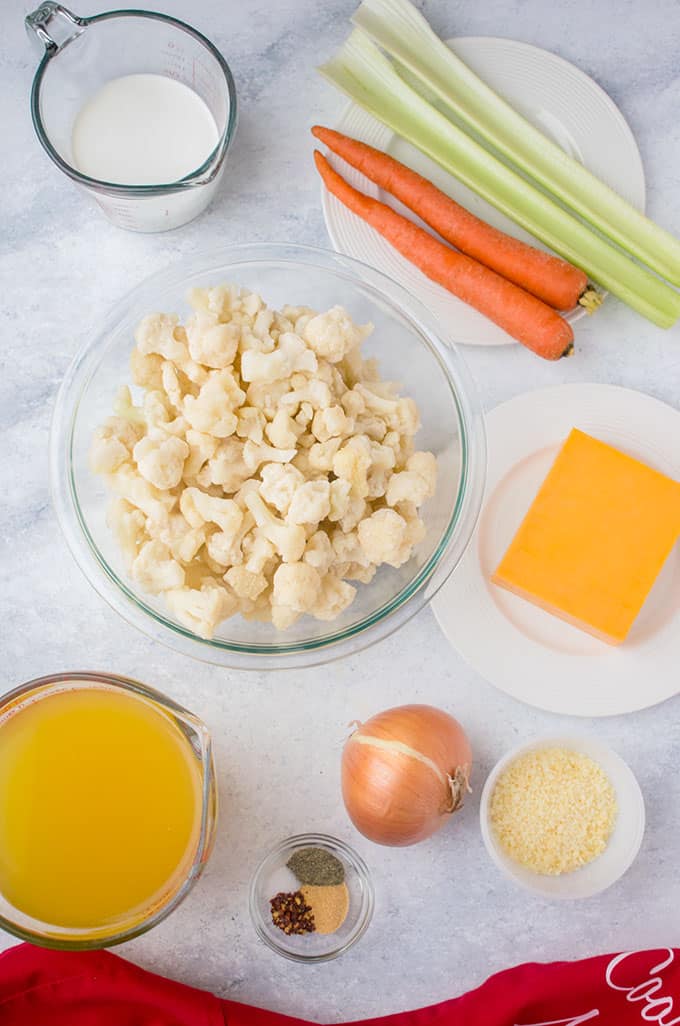 How to make slow cooker cauliflower soup with cheddar

In the morning, you'll chop an onion and dice a couple carrots and celery sticks. You'll throw those in the Crock-Pot (affiliate link) and add frozen cauliflower, seasonings, and stock.

Use a potato masher to mash the veggies right in your slow cooker. (For a smoother soup, you can use an immersion blender or transfer the soup in batches to a regular blender.)

Stir in Parmesan and some half and half. Gradually add the cheddar, stirring after each addition to make sure it's combined. Heat the soup on low in the slow cooker for another 5-10 minutes before serving with desired toppings. 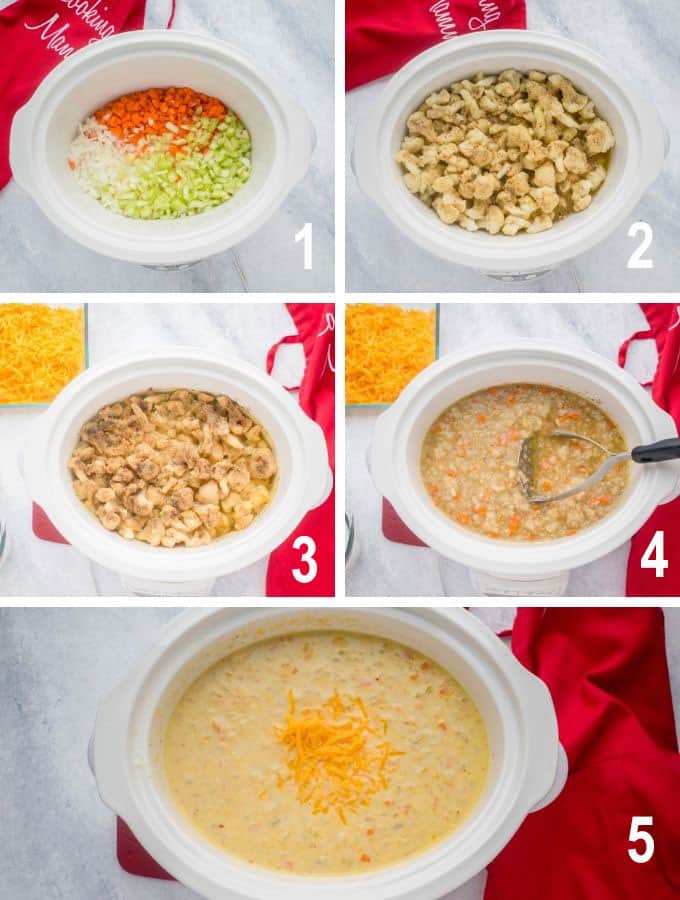 These are optional, but I recommend all three!

You could even add a dollop of sour cream, if you wish. Taste if extra salt is needed and then dig into your comforting bowl of cheesy cauliflower goodness! It's a relatively low-carb soup, with 15 grams of carbs per serving. 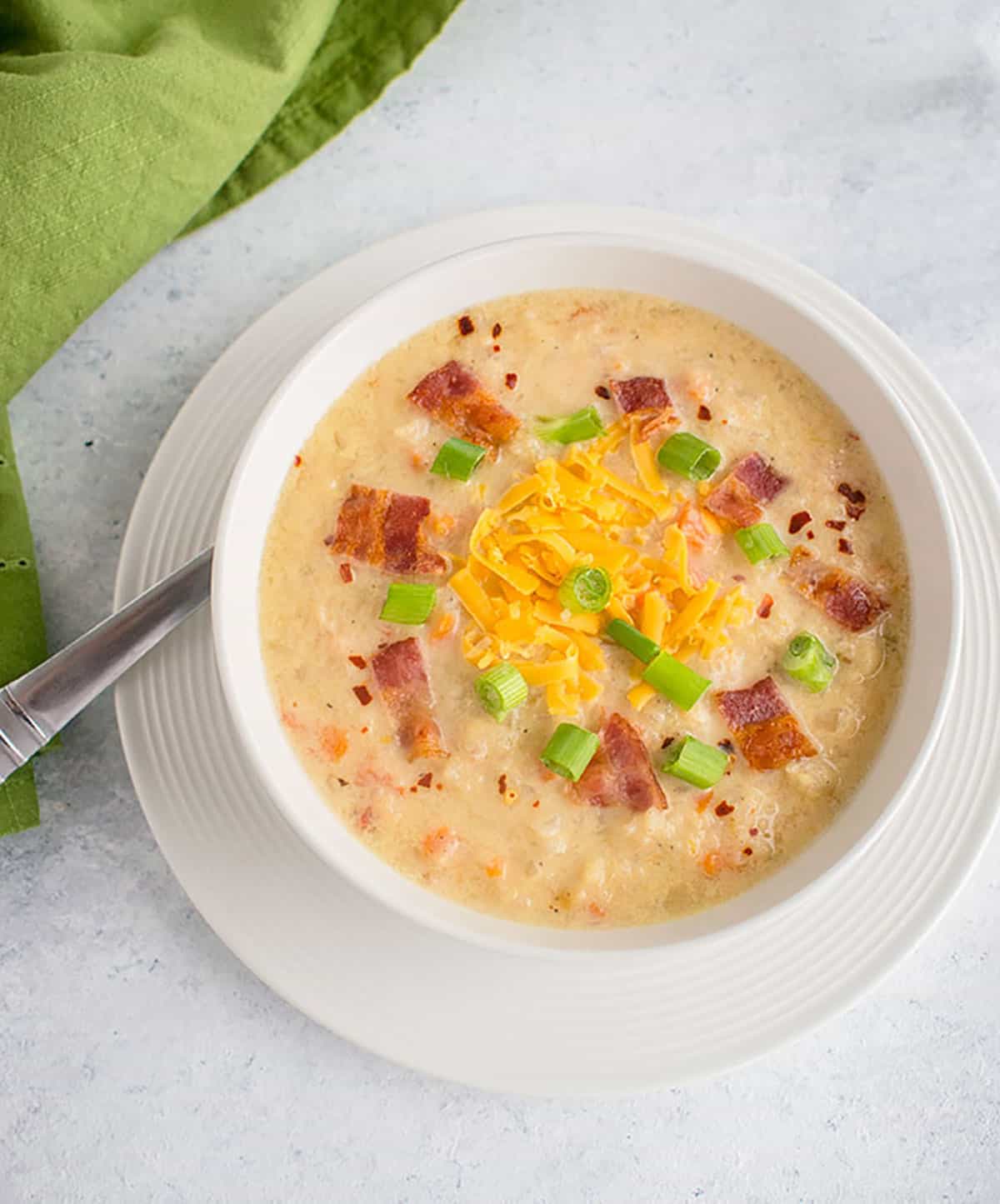 Refrigerate leftovers in a sealed container for up to four days. You also could freeze the cheddar-cauliflower soup for up to three months. 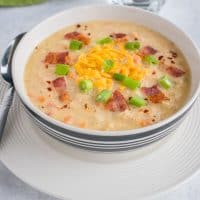 This Slow Cooker Cauliflower-Cheese Soup is so delicious and comforting! Serve it with toppings such as bacon and chives for a loaded cauliflower soup that'll knock your socks off! Plus, it's gluten free and has just 15 grams of carbs per serving.
4.80 from 5 votes
Print Pin Rate Save Go to Collections
Course: Soup
Cuisine: American
Prep Time: 20 minutes
Cook Time: 6 hours
Total Time: 6 hours 20 minutes
Servings: 8
Calories: 359kcal
Author: Mamma C