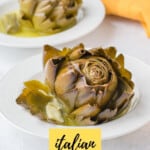 Learn to make the best Italian Stuffed Artichokes in the oven! Each leaf includes a slice of garlic and a sliver of Romano cheese! And don't forget to dip crusty Italian bread in the olive oil mixture from the pan!

Behold, my favorite vegetable of all time, prepared my all-time favorite way.

You're going to want to read every word of this post and look at every step-by-step photo I painstakingly took to show you how to make one of the best dishes of your life.

Each leaf (or petal) contains two presents ― a slice of soft, roasted garlic and a piece of melty Romano cheese.

Read on, folks. And don't miss my other Italian Side Dishes!

How to eat stuffed artichokes

You'll pluck a leaf, dip the base of it in that nectar-of-the-gods mixture of oil and water. You'll slightly bite down and scrape the inside of the petal along your teeth...and ascend to heaven!

Next, you'll dip some crusty Italian bread in that oil mixture and swear you can eat half a loaf, as long as every last drop of that Italian gold is sopped up.

This is a messy, gluttonous feast for the senses. If you don't have oil dripping down your chin, you're doing it wrong.

Which parts not to eat

Eat the artichoke heart and stems

Now you'll discover a hidden treasure ― the tender artichoke heart. You'll season it with salt and pepper, grab a fork and knife, and swoon when you take a bite.

OMG! If you've never eaten an artichoke heart that's not canned, jarred or frozen, you're in for a treat.

And that goes for the inside of the artichoke stems too.

First, I have to address the elephant in the room. There are no bread crumbs here.

While Sicilian stuffed artichokes often include them, my family never adds them to this dish.

I tried it once, and the bread crumbs were a distraction. They masked the flavors and texture of these Italian stuffed artichokes and did nothing for them.

I urge you to try this recipe as written! (And, these happen to be gluten-free stuffed artichokes, FYI.)

Artichokes: You'll need large, globe artichokes. Choose artichokes that are firm, feel heavy and have closed leaves. They should be green and not discolored.

They're expensive, so be sure to pick the best ones and don't settle for anything less. If you don't see good ones, wait to make this recipe until better artichokes are available at the best store for produce in your area.

Garlic: You'll need one large head, but have another one available, just in case. Remember, each leaf of every artichoke gets a sliver of garlic! We're not messing around.

Romano cheese: Use regular Romano or Pecorino, which is made from sheep's milk. You'll need to slice it thinly into little rectangles, and each leaf of every artichoke gets one.

Don't substitute grated cheese! I tried that shortcut once and regretted it.

You want the exquisite pleasure of chewing the pieces of melty, salty Romano that were baked inside the artichoke leaves with the garlic. I wouldn't use Parmesan as a substitute, because it doesn't pack as much flavor.

But if you need dairy-free or vegan stuffed artichokes, you can skip the cheese and still enjoy these with the garlic.

Olive oil & water: You'll need enough liquid to fill about ⅓ of your pan (or just less than half a pan).

You'll be baking the artichokes for about two hours. Some of the liquid will evaporate, and you'll want enough remaining to keep the artichokes from drying out and to use for dipping the petals and bread.

If you have leftover cooking liquid after eating the artichokes, you can refrigerate it for up to four days. It's delicious warmed up and stirred into pasta or poured over chicken. Or, enjoy it with bread!

How to clean artichokes

Rinse the whole artichokes and pat them dry. Place them on a large cutting board (affiliate link). Cut off the stems, which, when cooked, will turn out delicious, as long as they're not too thin and fibrous. (The inside of the stems tastes like the artichoke heart.)

Slice off the dark tip of the stem and rub lemon where you cut it, to prevent browning. Use a vegetable peeler to remove the outer tough skin on the stems.

1-2. Pull off the bottom five or six leaves around the base of the artichoke, because they'll be too tough to eat.

3-4. Cut off the top inch of the artichoke using a serrated knife (with teeth).

5. Rub lemon where you cut the artichoke, to prevent browning.

6. Trim off the sharp tips of each leaf with kitchen scissors.

How to make Italian stuffed artichokes

Cover and bake for about two hours, or until the leaves are tender. Test for doneness after one hour and 45 minutes.

What to serve with them

And don't even think of eating these Italian artichokes without crusty bread! You've got to dip it into that garlicky oil infused with artichoke flavor.

If you need gluten-free bread, have it ready.

These Italian Stuffed Artichokes are a great side dish for Italian Chicken Cutlets, which are made on the stove. Or, if you have a second oven, you can make Roasted Pork Loin with Rosemary and Garlic while the artichokes are baking.

Of course, these artichokes work well after a nice dish of pasta.

Can you use a roasting pan?

The short answer is yes, but you'll need to add more liquid, since a roasting pan has more surface area than a Dutch oven. You want enough liquid to fill at least ⅓ of the pan.

I use a Dutch oven (affiliate link) when I make just four stuffed artichokes. They fit perfectly inside, and I can use less olive oil than I'd need for a larger pan.

When I make eight stuffed artichokes, I use a large roasting pan (affiliate link) and add 2 cups of olive oil and 4 ½ cups of water.

Using a black pan or one made of iron will give the roasted artichokes a darker color, as you see in the photos. Use what you have, but if you prefer, you can use a stainless steel roasting pan (affiliate link).

If there is no oven-safe lid, cover the pan with two layers of foil before baking the artichokes.

Can you cook these on the stove?

I tried cooking stuffed artichokes on the stove, but was not satisfied with the result. They turned out having a boiled taste, instead of the deep roasted flavor achieved by baking the artichokes in the oven.

Can you make these in the Instant Pot?

I tried making these Italian stuffed artichokes in the Instant Pot (pressure cooker), but they tasted like they were steamed. They weren't nearly as flavorful as the roasted artichokes.

When are artichokes in season?

Spring is the best time for artichokes, although they're available year-round. They're in peak season from March through May.

How should you store artichokes before cooking them?

Sprinkle raw artichokes with a few drops of water and refrigerate them in a plastic bag for 3-5 days. The sooner you use them, the better.

And if you love artichokes, don't miss this Asiago and Spinach Artichoke Dip or this Creamed Spinach-Artichoke Casserole.

If you try these Italian Stuffed Artichokes, be sure to leave a comment and a rating! 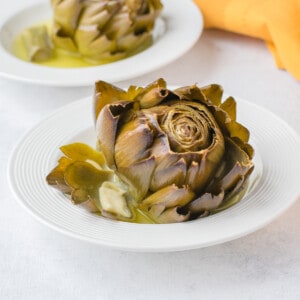 Don't miss the step-by-step photos and extensive information in the post that goes with this recipe. Artichokes: Choose large, whole artichokes that are firm, feel heavy and have closed leaves. They should be green and not discolored. The larger the artichokes, the longer they'll take to cook. If you try this method with smaller artichokes, you should probably check for doneness after an hour. Nutrition information includes half the amount of olive oil, since it's not all consumed (unless you decide to soak up every last drop with bread.) Nutrition information does not include bread. Type of Pan to Use I use a Dutch oven when baking four artichokes, since they fit snugly and I can use less oil than if using a roasting pan. The pan needs to be filled at least ⅓ full with the olive oil/water mixture (or just under the halfway mark.) Olive Oil/Water Mixture Use a ratio of two parts water to one part olive oil for flavorful pan juices that will be infused with the taste of artichokes. If you want to cut down on the oil, you can reduce it a bit and increase the water (perhaps use 2.5 parts water to one part oil). At a minimum, use three parts water to one part oil. If some of the delicious olive oil mixture is leftover after eating the artichokes, you can refrigerate it for up to four days, reheat it and stir it into pasta, pour it over chicken or enjoy with bread.

(Recipe Source: Adapted from the method used by my aunts' Sicilian mother-in-law.) 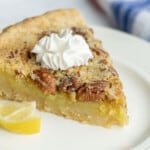